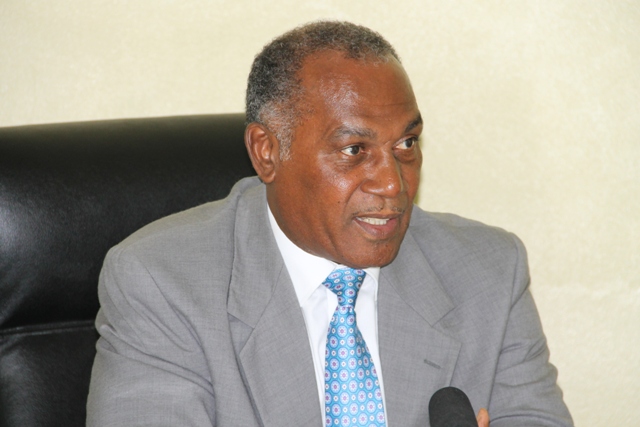 Premier of Nevis and Minister of Education Hon. Vance Amory
NIA CHARLESTOWN NEVIS (May 30, 2014) –Premier of Nevis and Minister of Education Hon. Vance Amory gave the Nevis Island Administration’s (NIA) commitment to including the Technical Vocational Education and Training (TVET) programme in mainstream education on Nevis.
Mr. Amory’s comment came on May 27, 2014 at a meeting with other officials of the Ministry of Education and a two-member team from the Caribbean Development Bank who were on Nevis to discuss issues related to TVET principles among them, how the programme could contribute to the island’s economy and how it fitted into the education system.
“I want to certainly indicate my own commitment to embracing the TVET as mainstream educational development. Too long have we placed it outside the ambit of mainstream education. Those who can’t do academic work, you tend to push them into what we say ‘you can work with your hands.’
“I think we want to take it to a different level because we want to be sure that when we shall have done our skills training through TVET, through the vocational unit at the schools, that those students whom we expose to this development, that they are not just hewers of trees, that they can think the process through, that they can become designers. They can become managers and they can become engineers or whatever they want at the highest level,” he said.
Mr. Amory explained that the Administration had been faced with questions with regard to the skill pool on Nevis from potential developers and it had become important to develop that area of the island’s educational system.
“This is a question we keep having posed at us when we have development. ‘Do you have the skill to not only do the work but can we put someone who will supervise that particular aspect?’ because you want someone who not only has the practical competence but has the theory which can drive the whole process. So that is an important part of what we will hope and that is where we now look at, a combination of things, I suppose,” he said.
Permanent Secretary in the Ministry of Education Mrs. Lornette Queeley-Connor, echoed similar sentiments regarding the stigmatisation of the TVET programme. 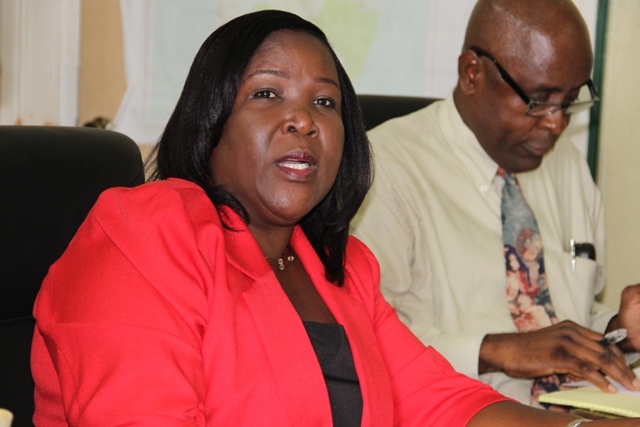 “There is a stigma attached to T-VET where the children in the lower streams are the ones to study those areas. We want to move away from that and we want to be the models in the Caribbean, if we can, as small as we are, where we show the seriousness of the technical and vocational areas by not having the thinking that only a certain set of students could study a certain set of subjects. So we are trying to move away from that,” she said.
Also present were, Permanent Secretary in the Premier’s Ministry Wakely Daniel, TVET Coordinator in the Ministry of Education on Nevis Orette Smith, Principal TVET Officer in the Federal Ministry of Education Fritzroy Wilkin, Assistant Secretary in the Premier’s Ministry Angela Scarborough and Cabinet Secretary to the NIA Steadmond Tross. The CDB team comprised of Operations Officer (Education) Dr. Martin Baptiste and Operations Officer (Civil Engineering) Stephen Lawrence