CHARLESTOWN NEVIS (March 22, 2010) — The relevant authorities on Nevis were readying themselves for the delivery of geothermal energy in the first half of 2011.

Minister of Natural Resources and Public Utilities on Nevis Hon. Carlisle Powell made the disclosure in an interview with the Department of Information on Thursday.

He said geothermal Developers West Indies Power Ltd. would deliver the harnessed power to the Nevis Electricity Company Ltd. (NEVLEC), from the 10megawatt plant at Spring Hill via an interconnection point on property which will be leased to the company.

“NEVLEC will have to take the power from that point to the main distribution point at the Prospect Power Station. It then means that we are going to have to develop a transmission line so that we will be able to move the electricity from Spring Hill to Prospect and that transmission line will be to transmit 33,000 volts of power.

“So that money which we are sourcing for NEVLEC would be first of all to receive the power at 11,000volts to make sure that we transform that power from the substation up to 33,000 volts that we take it all the way from Spring Hill to Prospect and then we reconnect it to 11,000volts to the distribution point, so that we can now send that to the homes of the people. That is not going to be a cheap venture, it is probably going to cost in the region of $8.5million and so that is what we are proceeding to do,” the Minister explained.

He said though West Indies Power Ltd. had to source their own funding to develop the project, did not mean that the NIA and NEVLEC in particular would not have to secure any funding.

Minister Powell said they had already developed a fairly reasonable costing of the project for the government and funding agencies that were able to lend the funds had been approached.

“We had some extremely good discussions with the US Export Import Bank. These discussions were held in Washington late in February and were attended on the government side by myself, my Permanent Secretary Ernie Stapleton and General Manager of NEVLEC Mr Cartwright Farrell.

“We also had discussions with the Scotia Bank Group in Washington as well and so we were requested to do a number of  things which we are in the process of doing some of which we have completed and we are positive that moving forward we will be able to meet our part of the bargain,” he said. 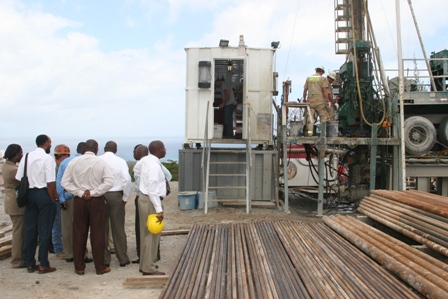 A group visit to the Spring Hill drill site (file photo), where the first geothermal plant will be located

With regard to the status of the geothermal project Mr Powell noted that the NIA had held recent meetings with West Indies Power Ltd. and had received the assurance from the company’s chief financial controller that all the funding required to set up the10 megawatt plant had been secured and they would be able to supply Nevis with the geothermal power which the NIA promised the people.

He said despite a seemingly dormant state the geothermal project had always been alive and as far as the government of Nevis was concerned there was never any doubt about the project.

“That is not to say we have not been listening to other people because we have had approaches from at least a half dozen potential investors who are prepared to step into geothermal in Nevis and to be able to work with the geothermal project. So in terms of doubt we have never had any doubt with respect to geothermal power and our ability to move the project forward,” he said.