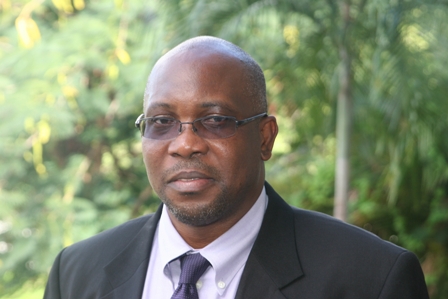 NIA-CHARLESTOWN NEVIS (January 26, 2011) — “Our water remains safe to drink.” These were the words of Minister responsible for Public Utilities in the Nevis Island Administration (NIA) Hon. Carlisle Powell on Wednesday, amid claims that surfaced on the internet one day before, that the island’s public water supply was a health risk  and unsafe for consumption.

In a statement to the Department of Information, Mr. Powell said the attention of the Ministry of Communications, Works, Public Utilities, Physical Planning, Ports, Natural Resources and Environment had been drawn to what he described as a malicious and mischievous attack launched on Nevis’ water system.

“The claim of Salmonella in our well water supply is a cowardly, false and malicious act by some desperate people. The clear aim is to attack one of our successes of this government. Our water is safe…

“As Minister with responsibility for Water, I state categorically that our water supply remains safe to drink. There is no issue with Salmonella in our well water. I have always and still drink water straight from the pipe,” he said.

The Water Minister said the Government of Nevis regarded the malicious attack on the Nevis Water Department, the Government and the people of Nevis as serious and an attempt to destabilise the society and warned the perpetrators that their actions would not go unnoticed.

“In this regard, we will leave no stone unturned to get to the bottom of this. The Nevis Island Administration led by the Honourable Joseph Parry will continue to make life better for all Nevisians,” he said.

Mr. Powell also referred to a report from the Federation’s Chief Medical Officer Dr. Patrick Martin which stated that there was no evidence to suggest that the water supply was contaminated.

According to Mr. Powell, Dr. Martin’s report indicated that the portable water on Nevis was safe for consumption and met the requisite standards. 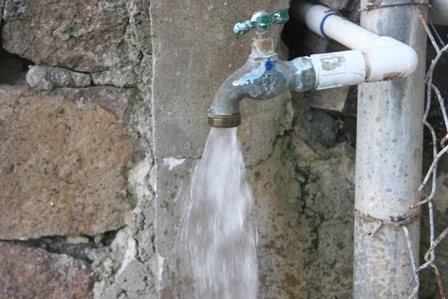 A pipe at Bath, flowing on Wednesday with water safe for public consumption

“Subject to the interventions of the Water Department, the portable (drinking) water supply in Nevis meets international standards. Under normal circumstances, ground water (meaning underground water) is safe because of the filtering effect of soil and the presence of conditions that either limit or prevent the survival of micro organisms (germs)

To persons who were trying to spread fear among the public and those who insinuated a cover up by his Ministry, Mr. Powell asked them to provide answers to where and when the water samples were taken? Who took them? Which lab tested them? Where were the authenticated results of the tests? and they should provide evidence of a cover up on the part of the NIA.

The Minister noted that the NIA led by Hon. Joseph Parry, since it had taken up office in 2006, had worked assiduously and successfully to improve the water system on Nevis.

He reminded that Geologist Dr. Ronald “Skip” Hoag of Bedrock Exploration and Development Technologies (BEAD), had introduced the concept of deep drilling which helped the NIA to add 1million gallons of water per day to the water system.

Mr. Powell said the staff at the Nevis Water Department had worked hard and during the hash drought in mid 2009, while the neighbouring islands were adversely affected and were forced to ration water, the Department kept Nevis supplied with quality water 24 hours a day seven days an week.

“Our wells which had remained neglected for 14 long years and had built up a significant amount of silt were cleaned. We repaired leaking reservoirs and installed in excess of 100,000 feet of new Distribution and Pump lines.

“New pumps were installed and for the first time in our history, the Nevis Water department has avoided the need to ration water and as a result our water supply has been kept pressurised. Any junior water technician would tell you that a pressurised water system is not conducive to the development of bacteria,” The Minister said.