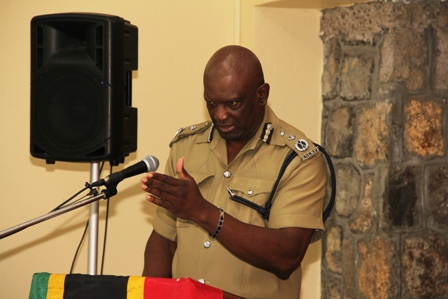 Assistant Commissioner of Police stationed on Nevis Robert Liburd delivering remarks at the Royal St. Christopher and Nevis Police Force, Nevis Division’s annual New Year Programme at the Charlestown Police Station recreation room
NIA CHARLESTOWN NEVIS (January 10, 2014) — Assistant Commissioner of Police (ACP) attached to the Royal St. Christopher and Nevis, Nevis Division Robert Liburd called on members of the Nevis community to do all they could to assist Police in their continued quest to reduce crime on the island.
The Senior Police Officer’s request came when he delivered remarks at the Nevis Division’s annual New Year Programme on January 06, 2014. The event which was attended by Officers who serve in the Division was held at the Charlestown Police Station’s recreational room.
“To the residents and corporate citizens, I know many of you have suffered some losses. I want to suggest to you that you need to do something in order to help yourselves and help the police. I want to suggest that to avoid going back through this second experience that you invest in alarm systems, security bars, cameras and other intrusion-detection devices as a means of protecting your businesses and homes and make it a harder target for the criminals to exploit. If you do these things it would help us to reduce the incidence of property theft. Remember reducing crime is not only for the Police but it is for the entire community.
“The role of the community is very critical. It is a shared threat, a shared responsibility, a shared undertaking, shared opportunity resulting in shared stability. Doing this together will create a safer and stable economic environment for all citizens and investors,” he said.
However, ACP Liburd also had words of advice for parents, whom he partly blamed for some of the criminal activity on Nevis.
“Please spare me a few moments to say something to parents because as a result of parents not doing what they have to do that’s why we have so much problems in our community and so, I want to ask the parents to supervise their children much better than they have in the past. I am sure that they can do better and the parents I am sure they would have seen the increase in unlawful carnal knowledge of our young daughters. I am wondering if this is not a worrying trend for our mothers, our parents.
“You have seen our young sons being wasted away in gangs and the gun culture. I am wondering if our parents here in Nevis and in the Federation are not taking this serious and to do something to alleviate our young persons going down that road,” he said.
The role of wives and girlfriends also got attention from the Senior Police Officer and he also appealed to them not to be accessories to crimes.
“I also want to suggest something to the wives and the girlfriends within the community, as well, that they too have a role. They have to assist us and I want the wives and the girlfriends this year to take a stand. Tell your boyfriend or your husband ‘I am not taking any money that you rob and bring home. I don’t want the jewellery. So when you bring the money, I aint taking that and if you get lock up I am not assisting you’.
“Normally when the ladies take a stand we normally see some results. So I am asking the ladies and it’s only so we are going to help reduce some of the crimes. Like I said, crime fighting is not just for the police but persons out here. They can do something and so if we are going to reduce crimes these are some of the areas that they are going to have to look at,” he said.
According to Mr. Liburd, the statistics for 2013 had shown an increase of 24 reported crimes or an eight percent increase over that of 2012 with a 43 percent detection rate. The increase in crimes committed in 2013 was reflected in all categories among them the most prevalent –   property theft, armed robbery, wounding, homicide and unlawful carnal knowledge.
He explained that while the Police were not pleased with the surge in crime, the statistics indicated that the society had become intolerant one with each other and did not respect the rights of others including one’s property.
However, the ACP assured that the community that the Police would do all they could to reduce crime on Nevis.
“I wish to inform the community that we are not at all happy with the increase and it is our intention to review how and when we dropped the ball. We need to. Meanwhile, we will spread ourselves by being more proactive. We will intensify our patrols and undertake more rapid raids within the community in order to reduce crime. We want to ensure a safer Nevis,” he said.