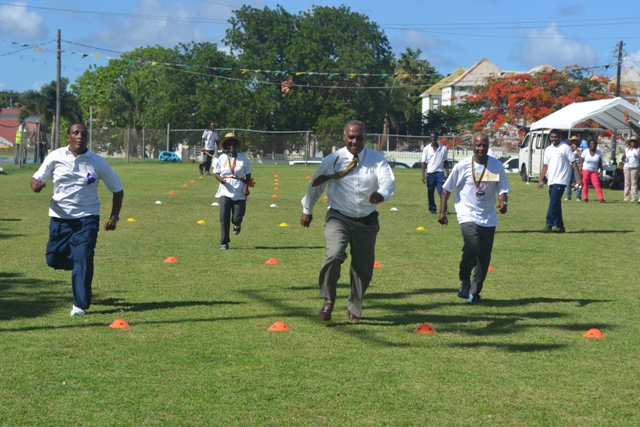 She proudly displayed her medals while announcing that she placed first in two of the events and second in two other events.
Likewise, Annie Brandy also fell but undauntedly finished the race in 2nd position. She exclaimed that the games were a wonderful event.
The seniors’ stamina knew no bounds, as everyone participated amidst much camaraderie and cheers from the spectators.
Premier of Nevis Hon. Vance Amory joined the competitors when he took part in the 60 meter walk race which turned out to be a 60 meter flat race. He placed first with much applause
In the midst of such good spirits, Mrs. Olvis Dyer contended that the Fun and Action Games was a good activity and it encouraged integration of seniors into the society. 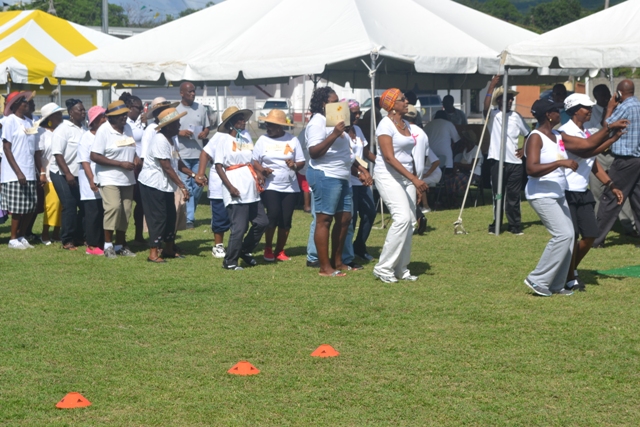 Another senior commented that it was a good way of bringing the island’s seniors together instead of them staying at home and staring blankly at the roof.
Caregiver for the Hanley’s Road community, Ms. Briony Dore thought that the Games was good for the seniors based on the positive health benefits that can be derived from exercising.
Meantime, initiator of the Games Amory-Field, noted that everything had gone as planned especially as all of the invited guests attended the event.
She added that she was particularly cheerful as one of the seniors Ms. Sheila Brookes, despite her hearing impairment and physical disability participated successfully in the activities. She expressed satisfaction that generally, the seniors did not allow their disabilities to mar their fun as was demonstrated by 95-year-old Liza Liburd, whose performance far exceeded the expectations of a visually impaired choreographer. 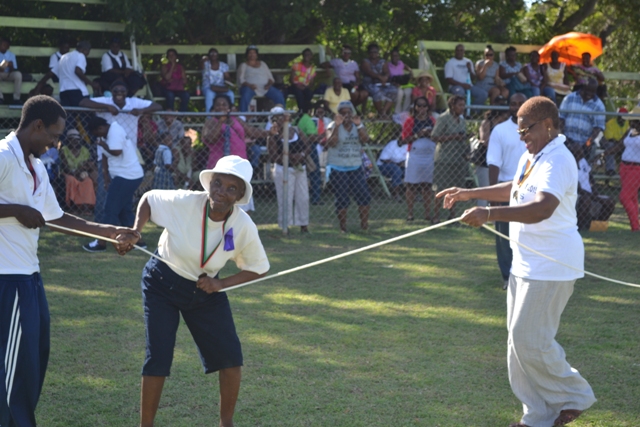 Ms. Amory-Field was optimistic that the sports event would not only be annual but that it would be marked by a public half holiday.
Also present to witness the opening of the landmark activity was Federal Minister of State responsible for Health and Social Services in St. Kitts Hon. Wendy Phipps accompanied by a group of seniors.
She announced that the cordiality would be returned as Nevisian seniors would soon join their Kittisian counterparts in some of their planned activities.
Also present was Deputy Premier and Minister of Health Hon. Mark Brantley, Permanent Secretary in the Ministry of Health Nicole Slack-Liburd and the Permanent Secretary in the Ministry of Health in St. Kitts Andrew Skerritt. 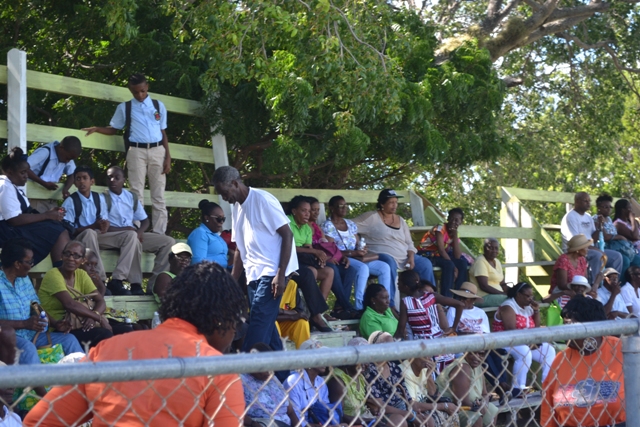