Charlestown Nevis (October 18, 2010) — As activities to celebrate the month of the elderly on Nevis continued with vigour, a group of seniors visited sister island St. Kitts on Thursday October 14, on a day excursion that saw some of them visit briefly with the oldest person alive in St. Kitts and Nevis, the then 111-year-old Ms Florence Baker, who will turn 112 on Tuesday October 19.

According to supervisor of the Seniors Programme Mrs Garcia Hendrickson, since the Department of Social Services in Nevis was revamped four years ago, the excursion to St. Kitts is an item the seniors have always looked forward to every October, as it helps them break the monotony of life. The much older ones are encouraged to bring a relative along.

“Last year there were about 70 of them but this year we had 55 who were accompanied by all the nine staff members in the Seniors Programme,” said Hendrickson. “Last time they went on the Sea Bridge but this time around they went on the Sea Hustler, leaving Nevis on the 9:00 am boat’s schedule run to St. Kitts.” 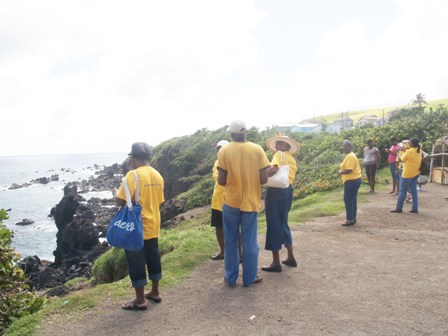 The seniors at Black Rocks

On arrival in St. Kitts they were met by the recently retired supervisor of Social Welfare, Mrs Anne Wigley, who told them that her love for the seniors had forced her out retirement for that one day. Ms Wigley was accompanied by a welfare officer in the department, Mrs Floreen Pogson-Mulrain.

Two buses were on hand to ferry the seniors and the first stop via Cayon was Black Rocks, a well known tourist attraction. Those on the second bus, in which Ms Wigley travelled had the opportunity to stop by Ms Florence Baker’s home in Cayon, and according to Wigley, Ms Baker wished them luck on their visit and even participated in a song with them.

The stop at Black Rocks was quite rewarding as many observed that they had never been there, while a few said with pride that they would have come there, in the company of visiting relatives from overseas. The next stop was the Beaumont Park at Dieppe Bay where they saw the facilities, even though it was not a race day. Many used the stop as a bathroom-break. 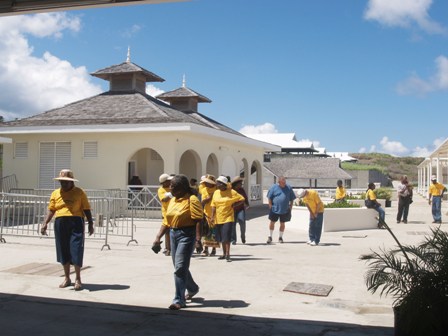 The seniors at Beaumont Park

The final stop was the St. Paul’s Community Centre where members of the Golden Years Club led by its vice president Mrs Rosalyn Bradshaw-Grant welcomed them. Lunch was served at the community centre but before they enjoyed their lunch they entertained themselves with songs and dance. Climax was a hat show parade organised by Mrs Cathy Tyson of Nevis, where they danced and swung like young girls to the sounds of Arrow’s Hot, Hot, Hot.

Celebrations to mark the month of the elderly in Nevis continue on Sunday afternoon, 24th of October and according to supervisor of the Seniors Programme Mrs Garcia Hendrickson, the seniors will hold a concert. “We are going to put together some skits and some poetry and the seniors will model some hats and stuff that will be like the icing on the cake.” 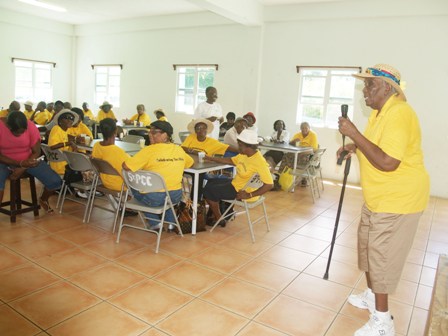 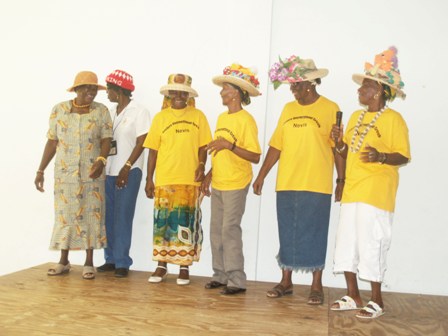 Hat parade. Cathy Tyson is on the right 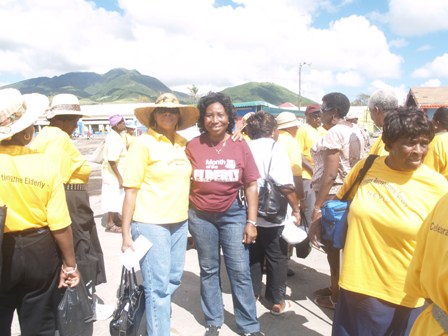