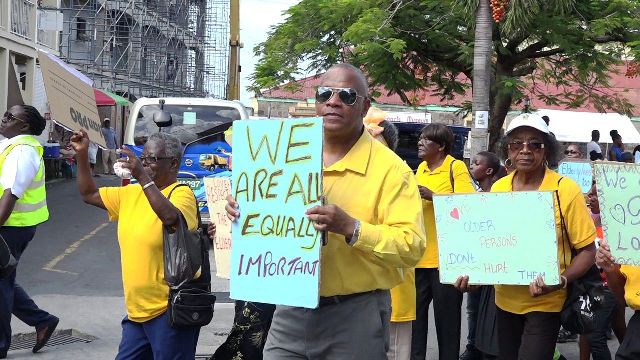 Hon. Eric Evelyn, Minister responsible for seniors on Nevis, joins in the annual Seniors March in Charlestown on October 05, 2018 hosted by the Seniors Division at the Department of Social Services in the Ministry of Social Development in the Nevis Island Administration

NIA CHARLESTOWN NEVIS (October 11, 2018) — Hon. Eric Evelyn, Minister with responsibility for seniors on Nevis, says that the vigour on show by the island’s seniors during the annual Seniors March in Charlestown on October 05, 2018, sends important messages to the rest of the community.

Mr. Evelyn told the seniors who were accompanied by a contingent of seniors from St. Kitts that he was delighted with his experience at the march, which snaked its way through Charlestown and culminated with a small ceremony at the Elquemedo T. Willett Park. The event is part of the month-long celebration of seniors, hosted by the Seniors Division at the Department of Social Services in the Ministry of Social Development in the Nevis Island Administration (NIA).

“I was extremely pleased because I saw the vigour and the vitality and the energy of our seniors and the march sent a message this morning. The march sent the message that our seniors are just as strong, energetic; as enthusiastic; as important as all other members of the community on Nevis.

The minister commended the seniors for their participation and encouraged their families to take part in the public activities during the month, in particular, a Health Fair in collaboration with the Ministry of Health on October 12 at the Villa Grounds from 8 a.m.; a Family Fun Day on October 18 at the Elquemedo T. Willett Park from 10 a.m.; and the inaugural Family Trivia on October 27 at the Nevis Performing Arts Centre (NEPAC) from 5 p.m.

The month of activities is also being held in observance of International Day of Older Persons on October 01. The day is set aside annually by the United Nations (UN) to recognise the contributions of older persons to the development of the society throughout the world.

This year’s theme, “Celebrating Older Human Rights Champions,” is the same being used for Seniors Month on Nevis. It is in keeping with the guiding principle of the UN’s Secretary General of “Leaving No One Behind.”

Mr. Evelyn believes that with a clear understanding of the demography and population dynamics, it is fundamental that older persons are incorporated in all aspects of living for sustainable development.

He also used the opportunity to commend the staff of the ministry and division for planning and executing the month of activities in celebration of the island’s seniors.