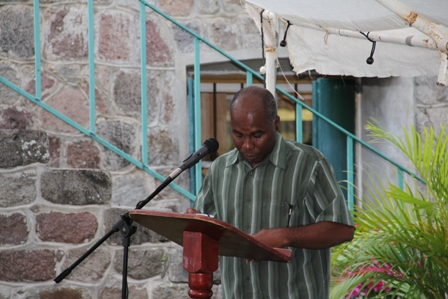 Mr. Pemberton was at the time delivering opening remarks at the Fund’s annual Tea Party and Scholarship Awards ceremony on January 11, 2013, hosted by the Nevis Historical and Conservation Society (NHCS).

“It is my hope that the joint ceremony here will inspire our scholarship holders to strive for excellence by using Nevis American Alexander Hamilton as their inspiration and role model in overcoming their educational challenges in the face of advertise,” he said.

The scholarship programme which had been dormant for some time was reintroduced in 2008 by then Minister of Social Development Hon. Hensley Daniel in line with the NIA’s mandate to empower people through education and training so that they could contribute fully to the socio-economic and political development of Nevis.

Apart from providing the awards to four promising but financially challenged students, in their pursuit of their educational and academic goals, this year the NHCS used the event to highlight the birthday and contributions of Nevisian born Alexander Hamilton. He later became a founding father, soldier, economist, political philosopher, one of America’s Constitutional lawyers and the First United States Secretary of the Treasury.

To date, a total of 20 students have benefitted from the Scholarship Fund since its reintroduction in 2008. This year’s awardees were Ms. Siana Daniel, Ms. Celin Hendrickson, Mr. Andre Arthurton and Mr. T’jarie Arthurton.

Mr. Pemberton ended his remarks with a fitting quote from Alexander Hamilton.
“Men give credit for some genius. All the genius I have lies in this; when I have a subject in hand, I study it profoundly. Day and Night before me, my mind becomes pervaded with it. Then the effort that I have made is what people are pleased to call the fruit of genius. It is the fruit of labour and thought.”