NIA CHARLESTOWN NEVIS (March 18, 2013) — Tourism officials on Nevis will continue to market Nevis as a small luxury cruise destination. Deputy Premier of Nevis and Minister of Tourism Hon. Mark Brantley underscored the Nevis Island Administration’s decision to go that route citing there would be no further investments to expand existing cruise facilities.

Mr. Brantley made that disclosure when he spoke to the Department of Information on March 15, 2013, shortly after his return from the Sea Trade Cruise Conference held in Miami.

“We do not have any intentions to build any cruise facilities in Nevis, spend multi millions of dollars on that.

“We feel that our focus is still predominantly land based tourism but where we can access either day trippers from St. Kitts or alternatively we can access the small high end cruises. That is certainly the way that we wish to go,” he said.

According to Mr. Brantley, it was in that vein which he held meetings with officials from the Azamara and Windstar cruise lines.

“What we are saying is that we can facilitate and market ourselves to the small cruise ships.  Windstar for example has a capacity of only 308 passengers and that type of capacity, that’s what we are looking for. The higher end more expensive cruises if you will, the kind of clientele would appreciate what Nevis has to offer,” he said. 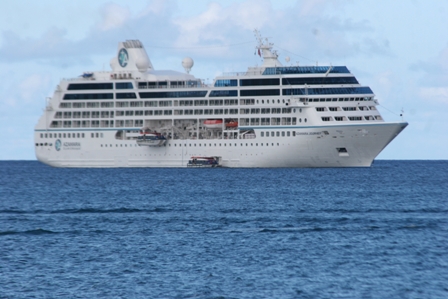 The Tourism Minister added that the idea of the liners overnighting in St. Kitts and Nevis was receptive by both Azamara and Windstar instead of visiting, spending some hours and departing the destination.

“One of the things that we stressed and I was very pleased that both Azamara and Windstar were receptive to is the idea that they ought to overnight in St. Kitts and Nevis. So rather than coming in and spending just a few hours, they will overnight here.

“We have been promoting St. Kitts and Nevis as a sort of Ying and Yang of the Tourism Industry, offering two islands very close together, two destinations very close together but at the same time, offering such a difference in product and they really felt excited about that possibility,” he said.

Mr. Brantley explained that with the cruise liners overnighting it would afford their guests the opportunity to experience the destination intimately and increase economic activity.

“We figure that would be a good thing because it affords them, the opportunity – their guests, to take advantage of our restaurants our very world class restaurants that we have here on the island of Nevis.

“So we are trying if you will to expand the amount of time that the visitors are here and by so doing, hopefully that can lead to greater economic activity for the people,” he said.