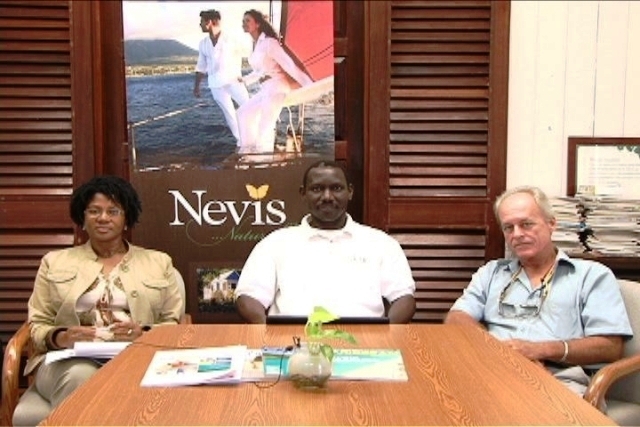 (L-R) Marketing Manager for the United Kingdom Ms. Julie Claxton, Chief Executive Officer of the Nevis Tourism Authority Mr. John Hanley and Tourism Advisor to the Nevis Island Administration Mr. Alastair Yearwood three of the four member delegation to represent the Authority at the World Travel Market in London, at a press briefing at the Authority’s conference room in Charlestown

NIA CHARLESTOWN NEVIS (November 02, 2012) — A four member delegation will represent the Nevis Tourism Authority (NTA) at this year’s World Travel Market at the Excel Centre in London. The event will run from November 5-8th 2012. The disclosure came from the NTA’s Chief Executive Officer (CEO) Mr. John Hanley at a press briefing on October 26, 2012.

Mr. Hanley, who left Nevis earlier this week to attend events over the weekend ahead of the Market, indicated that he would be joined early next week by Tourism Advisor to the Nevis Island Administration Mr. Alastair Yearwood, Marketing Manager for the United Kingdom Ms. Julie Claxton and Chairman of the Authority’s Board of Directors Ms. Keisha Jones.

He also gave an insight into the NTA’s plans for the Market which had a history of attracting some 45,000 visitors annually and noted that the booth shared by their counterparts in St. Kitts would be themed with the Federation’s 30th anniversary of Independence celebrated in 2013 in mind.

“There are going to be some events at the both which would be precursors to the 30th anniversary of Independence. One of the main things is that we are going to have a timeline at the booth and it will chart the development of the Tourism Industry from Independence in 1983 up to the 30th anniversary… It also would extend beyond that for about three years and it would show some of the featured events.

“The booth design is going to be pretty much the same. We have had a very successful booth space which we have shared with St. Kitts Tourism Authority over the last several years. The focus of the both is a Caribbean fishing boat and the design has been so successful, it is one of the most photographed booths at WTM. We are going to make some slight modifications in terms of the colour scheme but we are going to continue with that for this year,” he said.

According to Mr. Hanley, almost every country in the world is represented at one of the Tourism Industry’s largest annual travel shows. He explained that like all the participants, Nevis would have the opportunity to dialogue and liaise with key professionals in the industry and to bring very important attention to the destination.

The NTA’s CEO also spoke to the events he would attend prior to the Market from Saturday.

“Prior to WTM we are going to be attending what is called the Commonwealth Fair. Many different nations of the Commonwealth will be coming together and they will be meeting at the Kensington Town Hall. We will get to see many different aspects of the destinations, particularly their products…so it’s a good opportunity for there to be exchange about the various destinations and St. Kitts and Nevis would also be represented at the Commonwealth fair which would be the Saturday before WTM.

“The Sunday immediately before WTM would be a very important forum in which the top officials, CEOs, Directors of Tourism, Ministers of Tourism will have an opportunity to discover from the Caribbean Tourism Organisation the primary trends that have been taking place in the European market. That would be at the Telegraph Media Building and we will be attending that event,” he said.

Notwithstanding, Mr. Hanley noted that throughout the WTM, they had a packed schedule with a number of appointments with the media, tour operators and other professionals in the industry.

Therefore, he said it was the delegation’s intention to give Nevis as a destination, maximum exposure. On their return they planned to inform the public of their accomplishments and the exposure they had been able to give the destination.