Dr. Patricia Bartlette, veterinarian attached to the Vet Services Department in the Ministry of Agriculture on Nevis, delivering remarks at the ground breaking ceremony for the Veterinary Clinic Expansion project at Prospect Estate on January 30, 2014
NIA CHARLESTOWN NEVIS (February 03, 2014) — Veterinarian in the Ministry of Agriculture Dr. Patricia Bartlette welcomed the expansion to the Veterinary Clinic at Prospect Estate and deemed it “a good thing” for the continued care of animals.
She was at the time delivering remarks at the ground breaking ceremony for an expansion of the Veterinary Clinic at Prospect Estate on January 30, 2014, a collaborative effort by the Nevis Island Administration and the Animal Humane Society (Friends of ARK). The Vet Service is offered by the NIA’s Ministry of Agriculture.
“What we are witnessing today is indeed a good thing so let us continue to work together to promote and provide the love, care and attention to our four-legged dependants, which they really deserve,” she said.
Dr. Bartlette explained that the Vet Services on Nevis had come a long way since its inception in the 1970’s the building which housed the facility has seen little change.
However, she explained that Nevis was no different from other islands of the Caribbean where the Vet Services was created primarily for the provision of regulatory services related to the Animal Act and for the ambulatory extension services to livestock farmers, a system that had evolved over the years.
“Very little provision was made for services to companion animals. As a matter of fact this was considered private practice which, except for emergencies, was expected to be rendered outside of the official duties by the veterinary officer, who by the way, was still required to be on call 24/7.
However, overtime, by virtue of our shifting demands of our population, our people are now requiring a bit more from us and the policy, although not official, has really evolved for a bit more latitude for provision of pets,” she said.
Dr. Bartlette explained that over the years the profile of animals kept by families on Nevis had changed. 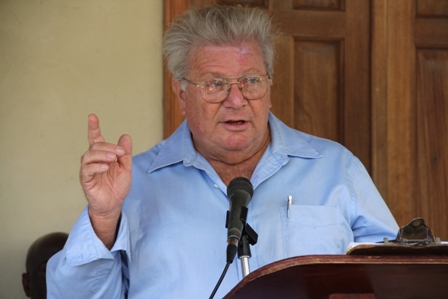 “Many families have gone from having 10 goats, 20 sheep, a dog and a cat in the backyard to no goat, no sheep, Ginger curled up in the living room sofa and Buster snoring right there on the bedside rug.
“So we have to respond to that so I think the government recognizing that we have to take everyone on board and no longer do we just provide service to cattle, sheep and goats,” she said.
In conclusion, the vet stated that the joint venture between the NIA and the ARK was a welcome addition
“We welcome this partnership with the NIA and the Friends of the ARK on this collaborative approach to achieving a common goal. In a time like this where there is so much discord, it is good to see individuals and institutions act in one accord,” she said.
Mr. Richard Lupinacci a member of ARK, in remarks on behalf of the local organisation said they had initially promised to raise funds to provide the Vets at the Clinic with the necessary tools but quickly realised that space was an issue as well.
“The original concept was to provide tools because we have two marvellous Vets known to most of us. They work very hard under difficult circumstances. They have the skills. They have not always had the tools and the support and they have done their very best.
We want to give them the tools now. We want them to have a proper surgery suit. We want it to be air conditioned. We need a laboratory,” he said.
Mr. Lupinacci spoke to the equipment they already secured and the challenges that were still ahead for the organisations in the venture.
“We at ARK raised the funds to get an X-ray machine; the blood units we want to do a guest anaethesia. We have a new surgical table and that’s on order from Florida now. We were able to get Ross University in St. Kitts to donate an X-ray machine and we paid to get this brought over here. It’s functioning but has to be assembled here. It’s in storage. There are many things in storage because there is no space in here so that’s where we got i to having to expand. 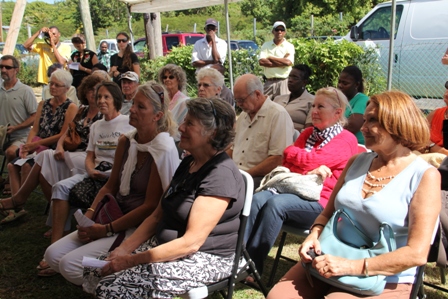 “The challenge will be raising the money to do this so we undertook to get all the equipment and we are going to try to undertake to get this building done and we are breaking ground today, we would hope to see this thing finished in four to six months with your support and help everyone,” he said.