(L-R) Federal Central Purchasing Unit Representative Joycelyn Matthew-Martin and Treasurer in the Nevis Island Administration Colin Dore
NIA CHARLESTOWN NEVIS (January 31, 2014) — Treasurer in the Nevis Island Administration (NIA) Colin Dore, expressed gratitude for a consignment of office furniture and equipment from the Federal Government’s Central Purchasing Unit (CPU) on January 30, 2014.
The furniture which was handed over to Mr. Dore by CPU Representative Joycelyn Matthew-Martin, came on the heels of a meeting between Premier of Nevis Hon. Vance Amory and Prime Minister of St. Kitts and Nevis the Right Hon. Dr. Denzil Douglas on January 24, 2014, after a fire gutted a building on January 17 which housed the Treasury, Inland Revenue and Value Added Tax Departments on Nevis.
“Today we are receiving a shipment of furniture from the CPU in St. Kitts, so we want to say thanks to our counterparts over there, the Ministry of Finance through the Financial Secretary Ms. Hilary Hazel and also Ms. Matthew-Martin from the CPU.
“They have come to our assistance and assisted us with some furniture and actually they have done more than that. They have brought a team over to help us with the assembling of the furniture so that we can have them ready for our offices by Monday,” he said.
Mr. Dore explained that the gift made it possible to provide furniture for more than 40 staff members who were affected and the equipment would assist with a speedy return to normalcy by the affected departments.
“We have a full complement of desks to sit all members who were displaced by the fire.  We have full complement of chairs as well.
“In addition there are some filing cabinets, including some fireproof filing cabinets, there are some computers and printers so we want to say thanks to them. We are quite grateful for their assistance and we want to assure them that they have gone a long way to helping us get back to normalcy as quick as possible,” he said.
The Nevis Treasurer also thanked members of the private sector who facilitated the shipment of the furniture and equipment from St. Kitts
“We want to also thank TDC Shipping because when we told them that we have these items. We called Earl Kelly at TDC and he was able to arrange a container for us, so we want to say thanks to Earl Kelly and the staff at TDC Shipping in both St. Kitts and Nevis.  Also Winston Skeete of the MV Sea Hustler who assisted us greatly by transporting some smaller items on the Sea Hustler. We got the container via MV Lady Mignonne. 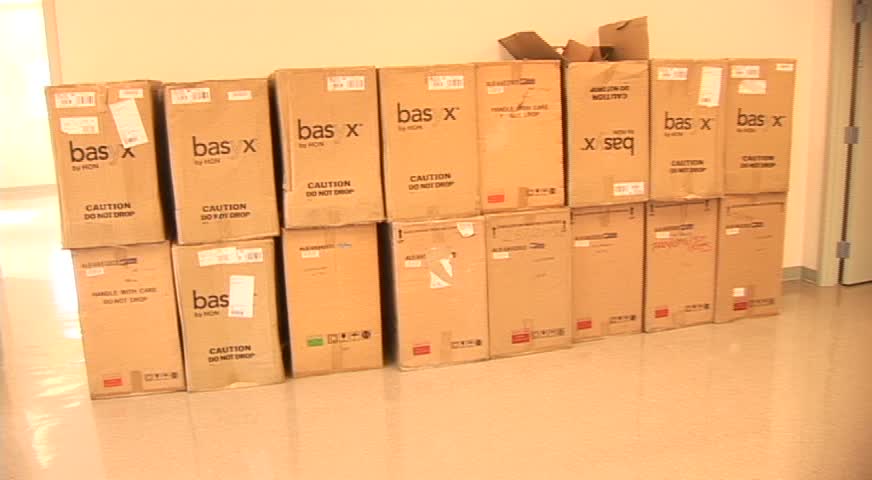 “So we want to say thanks to those Private Sector organizations who have come forward and assisted us during this time.  We want to say to them that we are eternally grateful to them for their assistance. It has been a difficult time for us and we are quite happy for the outpouring of support by the Private Sector, especially in trying to help us get back to normalcy as quickly as possible,” he said.
Meantime, Matthew-Martin who was accompanied by staff of the CPU and the Customs and Excise Department, in a brief comment noted that the donation was made possible through the efforts of the Federal Financial Secretary.
“We also want to not forget, Mrs. Hilary Hazel, our Financial Secretary, she was the one behind all of this and we are here also to make the Ministry of Finance proud,” she said.