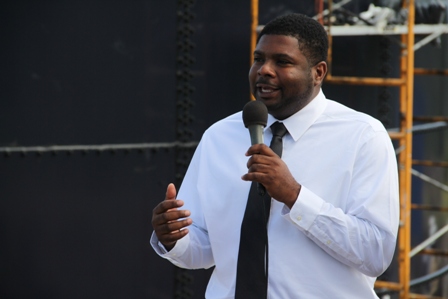 Junior Minister responsible for Public Utilities Hon. Troy Liburd at Camps
NIA CHARLESTOWN NEVIS (January 30, 2014) –Junior Minister responsible for Public Utilities on Nevis Hon. Troy Liburd reassured the public that work was ongoing, though slowly, on the Caribbean Development Bank (CDB)-funded Water Enhancement Project.
During a field visit to the Camps worksite on January 28, 2014, Mr. Liburd accompanied by Permanent Secretary Ernie Stapleton and Project Coordinator Brian Kennedy, told the Department of Information it was important for the public to be appraised of the ongoing work on the project.
“We’re here this morning because we want to give the general public an idea of what has been happening so far. Behind me you see some gentlemen erecting what is going to be a 300,000-gallon reservoir and we wanted the general public to know that work has been going on the water project. We’ve heard a lot of talk about the water project but not much people have seen what has been going on.
“We’re here at a site in Camps. People used to call this the Spring Area. I don’t know how visible it is from the main road going up through Camps so we wanted to come in here and let people know that work is going on,” he said.
Work on the project commenced last year and on completion would provide an improved water system on Nevis, capable of handling millions of gallons of water on a daily basis.
Ministe rLiburd also gave some insight into the ongoing work at Camps and in other areas related to the project.
“The more visible part of the water project, we expect that to start shortly… but what we have going on here is the erection of the first tank. It’s a fused glass. 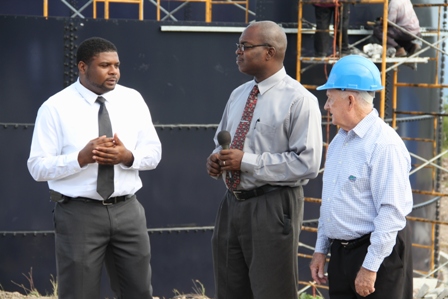 “We have completed the foundation on two other tanks already, one at Spring Hill and the other one at Maddens. We also have two more tanks… to go up, one in Forthergills and one in the upper Brown Pasture area but we have not done the foundations on those tanks yet. So work has been progressing slowly on the water project,” he said.
However, the Minister stated that in a month or two, work was expected to move at a faster pace when the pipes arrive on Nevis and the actual civil works will begin.
The Minister also used the opportunity to reassure the public that the project would make available work opportunities for locals.
“I just want to emphasize that with the exception of a few things such as the construction of the tank which is a highly specialized skill, most of the work of this project that we’re going to deploy will be done by local Nevisians.
“We will employ local heavy equipment, local labourers and so on throughout the year. Most of the work will be done by local Nevisians. The money will stay here,” he said.
Meantime, the Project Coordinator described the ongoing work at Spring Hill and the project as it related to that area on Nevis.
“As stated this holds 300, 000 gallons. It’s 48 feet in diameter and it will be 36 feet high. There will be another panel to go on the top of what you see here and then there will be a dome-shaped roof.
“This reservoir is part of six in the project and there are three pumping stations also. This reservoir here will be receiving water from Maddens, which is many miles away and would be used to feed the Camps Pumping Station,” he stated.
Kennedy also noted that although the project had been in its planning stages for several years, the Nevis Water Department made improvements as it was being designed. 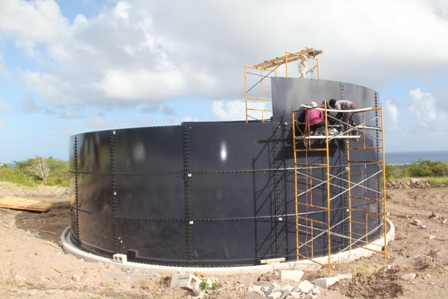 “In this particular case, we saw the opportunity of using this [reservoir], not just to feed the pumping stations but also to act as a service reservoir. To do that we have to get it up a bit higher than is required to feed a pumping station and we needed it to be up around the 250-foot contour.
“This area here satisfies the requirement for this reservoir and as well as feeding the pumping station, it will act as a service reservoir for a new area of the island extending from Lovers Lane at one end to as far as Pot Works at the other end and that will include all of New Castle from Combermere School, the Old Combermere School down to the coast including Nisbet Plantation Hotel, the airport and any other developments that might take place along the coast,” he said.
Kennedy said the roof for the reservoir was expected to be completed over the next two weeks, however, the pipes which are scheduled to arrive by the end of March into mid-April would have to be fitted before any water could be pumped into the new reservoir.
The Project Coordinator also stated, that the Camps reservoir would be gravity fed from the Maddens reservoir which is averaged to be 600 feet above sea level.
“This area will be gravity fed from Maddens reservoir. Maddens reservoir is about nearly 600 feet above sea level and this is about 250 feet. Here it will be a gravity feed using 10 inch pipes to get the water to here. That will be a considerable upgrade from what we have at the present time which is six-inch diameter,” he said.
From the Camps reservoir the water will be pumped to a new reservoir in Spring Hill. Kennedy explained that the original plan had called for the water to be placed at the reservoir at Mount Lily and changes had to be made. 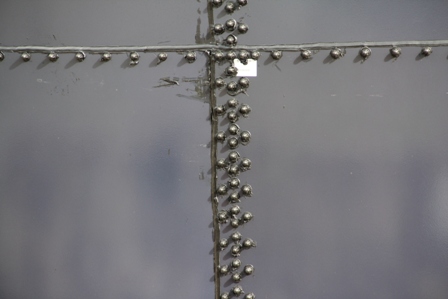 “Mount Lily is a little bit low and has been a problem for giving adequate pressure to Fountain Village, so we considered going a little bit higher. The idea that the maximum amount of storage will be at its highest point in the northern system that would be at Spring Hill that would be 500,000 there from Stony Hill.
“Actually, the engineers recommended that we would have one million gallons there in both of those two sites for security of water in the future because of hurricanes and power outages and things like that,” he said.