(L-R) Manager of the Vance W. International Airport Stephen Hanley, Permanent Secretary in the Ministry of Communication and Works Ernie Stapleton, Supervisors at the Public Works Department Danny Williams and Antonio Marshall and Junior Minister responsible for Communications and Works Hon. Troy Liburd at the Vance W. Amory International Airport on January 28, 2014
NIA CHARLESTOWN NEVIS (January 30, 2014) –Members of the Nevis Island Administration’s Public Works Department were publicly commended for work done to the parking apron at the Vance W. Amory International Airport.
Junior Minister responsible for Communications and Works on Nevis Hon. Troy Liburd praised the workers on January 28, 2014, when he visited them while on duty at the airport, for their ability to overlay a section of the apron which had been done in past years by overseas contractors.
“I want to say thanks to the Public Works Department and we have two supervisors from the Public Works Department here Danny Williams and Antonio Marshall who are a big part of what we are trying to do at Public Works.
“As you know, over the years, most of this type of work would have been done by personnel who would have come in from abroad but right now we are trying to give the local personnel a bit more exposure because we know that they can also do the work,” he said.
Minister Liburd noted that the work done at the airport was part of ongoing efforts to revitalise the island’s only airport.
“This little work that we have going on here at the airport is just a part of an ongoing effort to revitalise Vance W. Amory International Airport. We are hopeful that the work will continue from here to the runway. There are some parts on the runway that have already started to deteriorate and we’re hopeful that in a very short time we can do some remedial work there also.
“I am very happy that the Public Works Department could have assisted the [Nevis] Air and Sea Port Authority in getting the ramp done and I am hopeful, that in a very short time we will get to do some more work here on the airport. So I want to again say thanks to the director and staff at Public Works for the hard work that they are putting in,” he said. 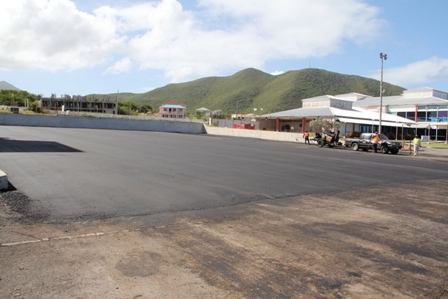 Airport Manager Stephen Hanley spoke to the importance of the overlay which had been in need of restorative work for some time.
“This overlay is important because the asphalt was in poor condition. After some time the asphalt needs some rehabilitative work, so we have partnered with the Public Works Department to ensure that this rehabilitative work is done. This will improve the surface and the safety of the travelling public as they use this facility.
“Asphalt has a lifespan and the asphalt here at the airport has been here for some time. So overtime we have been doing some rehabilitative work on the asphalt, so that we can ensure that it continues to serve the travelling public well,” he said.
Also present was Permanent Secretary in the Ministry of Communications and Works Ernie Stapleton.