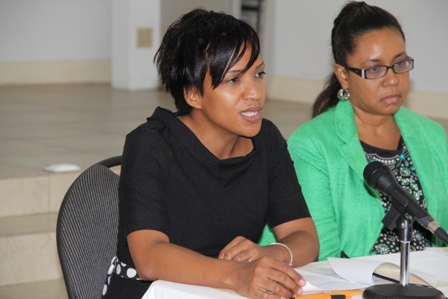 (L-R) Permanent Secretary in the Ministry of Health Nicole Slack-Liburd and Pan American Health Organization Country Programme Specialist for St. Kitts and Nevis Dr. Patrice Lawrence at the Pan American Health Organization and Nevis Island Administration sponsored Human Papilloma Virus and Vaccine Acceptability Study Workshop at the St. Paul’s Anglican Church conference room on January 29, 2014
NIA CHARLESTWON NEVIS (January 29, 2014) — Deputy Premier and Minister of Health Hon. Mark Brantley described a Human Papilloma Virus (HPV) and Vaccine Acceptability Study Workshop held of Nevis, as another demonstration of the Nevis Island Administration’s commitment to the island’s people who continued to be affected by cancer.
The comment came in a statement read by Permanent Secretary in the Ministry of Health Nicole Slack-Liburd on behalf of the Health Minister, at the workshop which was held in collaboration with the Pan American Health Organization (PAHO) for health practioners on January 29, 2014. It was held at the St. Paul’s Anglican Church Conference Room.
“This initiative is yet another demonstration of my administration’s commitment to not only women and girls but families and the society as a whole, who continue to be affected by cancer as evidenced by the morbidity and mortality statistics which also impacts the socioeconomic status of the residents of this great nation,” he said.
According to Mr. Brantley, the HPV study would complement existing programmes in the health sector which had been instrumental in the prevention and early detection of cancers. Among them were health education and the availability of pap smears in health centres around the island. 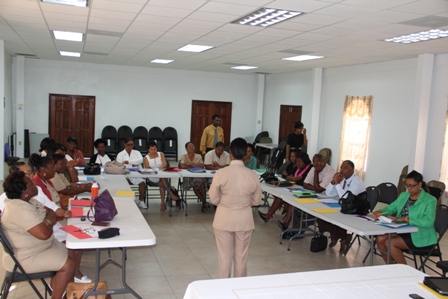 He noted that the Ministry of Health was cognizant of the alarming incidence of cancer on Nevis, a small island which had an average of 25 cases between 2010 and 2012 and welcomed partnerships with PAHO, the Caribbean Community (CARICOM) and others and reiterated the commitment in the area of prevention and control of non-communicable diseases (NCD’s).
The Health Minister described the workshop as timely, as it was being held in January, the month set aside as Cervical Cancer Awareness Month and one which led into February, when World Cancer Day was observed on Nevis