CHARLESTOWN NEVIS (November 05, 2010) — Youth Minister in the Nevis Island Administration (NIA) Hon. Hensley Daniel, told over 200 youths from across the region, at a Rotary Club sponsored event one week ago, that they should each play their part to help to stabilize the society as they took charge and focussed on basic values related to integrity.

Mr. Daniel’s call came when he addressed the youths from Rotary International District 7030, at the opening ceremony of the 49th anniversary of the Rotary Youth Leadership Awards (RYLA) Conference at the International University of Nursing in St. Kitts.  The theme for the four-day event from October 29 to November 01 was Youth Taking Charge.

“The integrity is fostered by adherence to Judeo-Christian values of love, honesty, respect, discipline, decency, tolerance, caring and sharing of hard work. These values helped to guide us. They worked then and they can work now.

“You have the task of working with government and non-government organizations to ensure that your peers uphold these values. You have to become extremists for good to stem the tide of anti-social behaviour among youth. Tell them that Jesus was an extremist for love. He urged us to love our neighbours like ourselves and to good them that curse you,” he said. 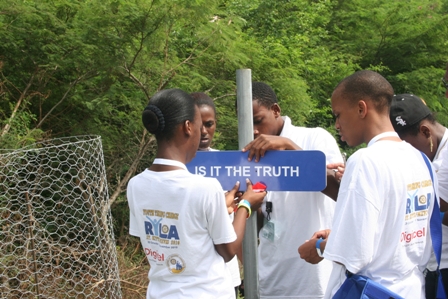 The Youth Minister told the youths that the conference provided them with an immense opportunity to come together and make a difference but he urged them to adhere to the values.

He further advised them to take on board the urgings of Booker T Washington, the first principal of the Tuskegee Institute in the United States of America who said “cast down your bucket where you are. Cast it down in making friends in a very mature way with all people and all races that surround you. In all things that are purely social we can be as separate as fingers, yet one as the hand on all things essential to mutual progress”.

Mr. Daniel explained that his reason for urging the youths to focus on the values was simply because as baby boomers prepared for retirement, they opted to spend their pensions on travelling rather than on burglar bars that warded off violence from the young.

During the conference, the youths were involved in a number of activities including discussions under sub themes of Taking Account; Taking Responsibility; Taking Initiative and Taking Charge.

They also visited Nevis where they planted Flamboyant trees in schools, repaired and replanted Rotary signs, read to some classes at primary schools and to seniors at the Flamboyant Home. 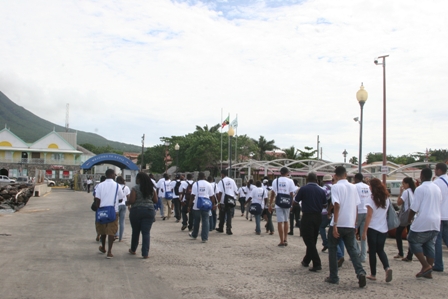 In St. Kitts they distributed shoes from Avon when they visited the Cardin Home; rehabilitated the War Memorial; re painted the entrance of the Gazebo at the Clarence Fitzroy Bryant College; made a public service announcement and planted a tree at ZIZ and conducted a beach cleanup exercise.