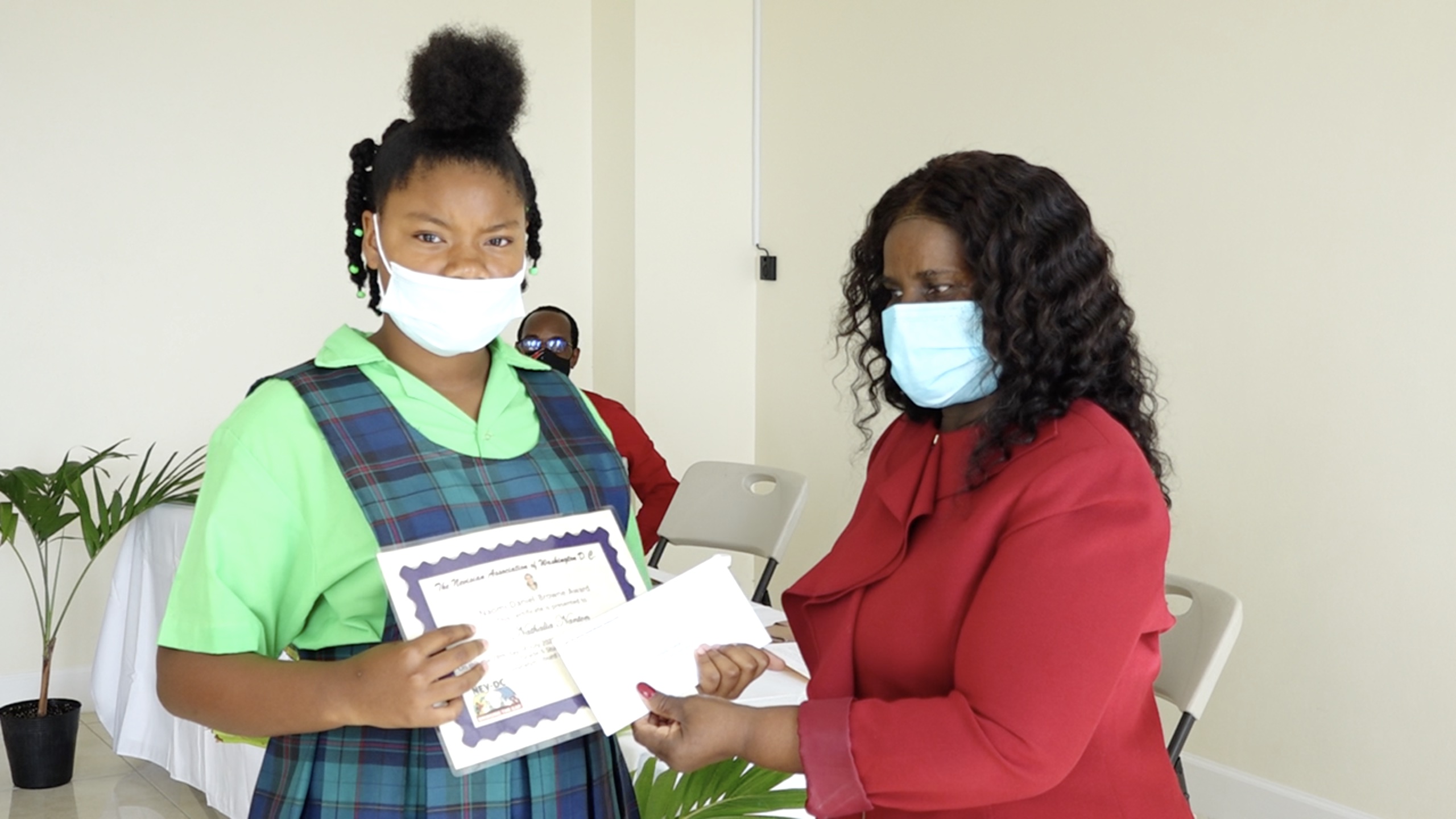 NIA CHARLESTOWN NEVIS (August 05, 2021) — Seven primary school students on Nevis are the beneficiaries of the first Naomi Daniel-Browne Scholarship, an initiative of the Nevisian Association of Washington DC (NEV-DC).

Primary School received the awards for Most Improved Students, at a ceremony at the Social Security Conference Room, on July 28, 2021.

Ms. Lauren Rivers, representative of the US-based Nevisian organisation said the scholarship programme is one way of giving back to the young people of Nevis in line with the organisation’s pledge to assist in the area of education, and in remembrance of their fallen colleague who was a stalwart educator.

“Naomi Daniel-Browne was an active member of NEV-DC. She was passionate about education.

United States but Naomi started her love for teaching right here on the island of Nevis and she taught in 1980 at the Joycelyn Liburd Primary School. Her goal as a teacher was to never leave any child behind. Naomi sadly passed away in June of 2019. To keep Naomi’s torch lit, and to ensure no child is left behind, NEV-DC established the Naomi Daniel-Browne Scholarship,” she said.

Ms. Rivers explained that the scholarship financially rewards the most improved student at the Joycelyn

She expressed hope that the programme would encourage students to do their best to achieve their goals.

The NEV-DC representative also thanked the Daniel family for allowing the organisation to attach Naomi’s name to the programme, and the Ministry and

Department of Education for their support in launching he scholarship.

Meantime Ms. Uta Trish Taylor thanked the Nevisian Association of Washington DC on behalf of the family of Naomi Daniel-Browne for honouring the legacy of her aunt.

“We are indeed grateful and we know Naomi is looking down and smiling, as through her legacy she can still impact the lives of students.

Ms. Taylor, herself a teacher, described her aunt as a teacher extraordinaire who loved teaching and

students, which propelled her to go over and beyond to help them.

“She was like Jerome Bruno and believed that every child at every level could earn once content was appropriately organised. She was a teacher who actively reached out to parents to ensure they were involved in their child’s development. She brought students who needed individual attention to her home and conducted what we would call micro teaching sessions to help them.

“Naomi epitomised the role of a teacher. She was talented, enthusiastic, assiduous, caring, helpful, empathic, and resourceful,” she said.

Ms. Taylor added that as a young teacher, having followed in Naomi’s footsteps, was happy to have commenced her teaching career prior to her aunt’s passing since she was able to benefit from her words of wisdom and encouragement.

She congratulated the recipients of the award and urged them to continue to do well.

“I would like to encourage you all to stay focused, work hard and believe in yourselves. If ever there is a moment you feel like giving up, remember this award and let it be a motivation to encourage you to push forward,” she said.

Among those present at the ceremony were Mr. Kevin Barrett, Permanent Secretary in the Ministry of Education, and Ms. Zahnela Claxton, Principal Education Officer in the Department of Education.