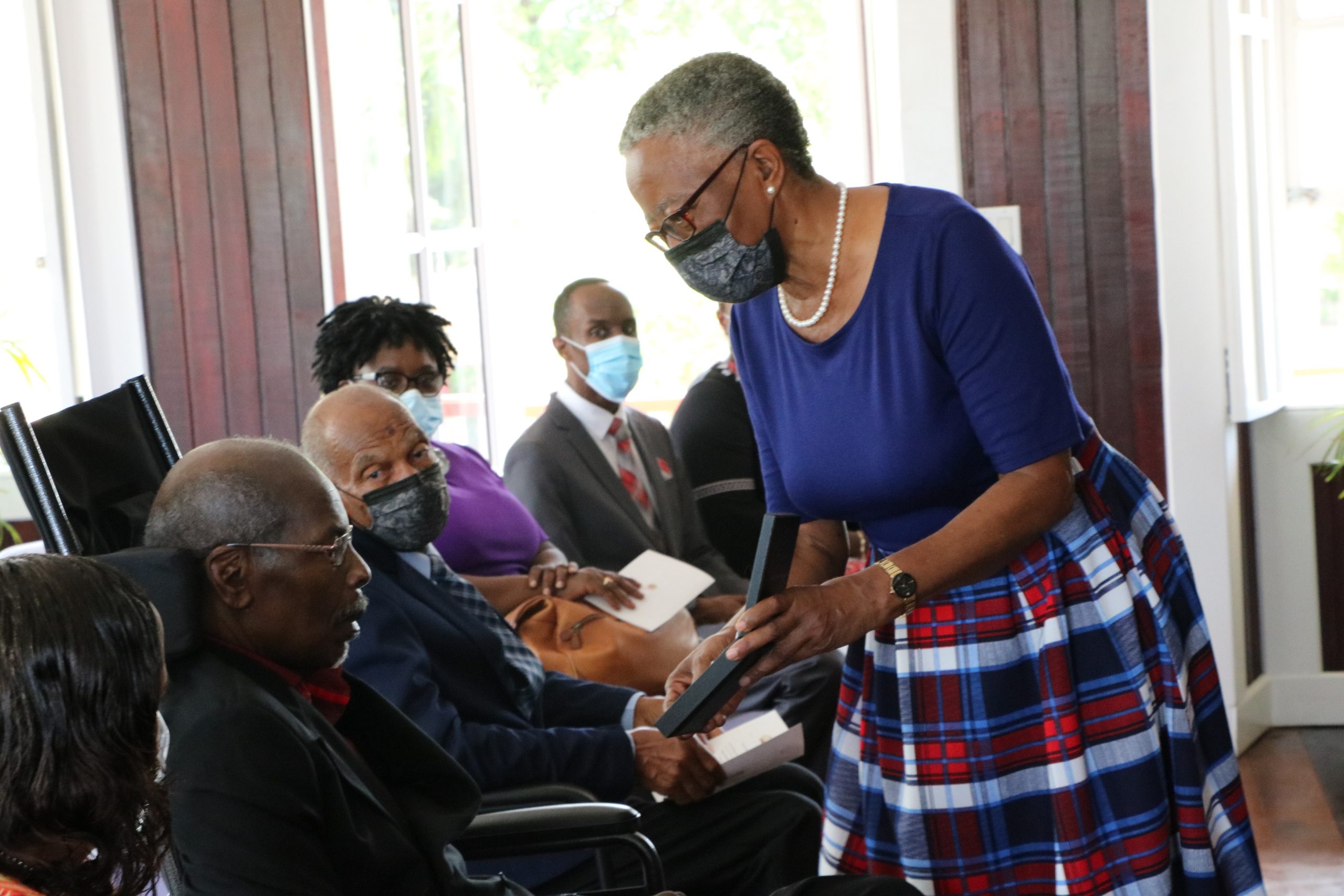 Her Honour Mrs. Hyleeta Liburd, Deputy Governor General on Nevis presents Dr. Albert Linton Liburd Sr. with the 2020 Medal of Honour for his outstanding contribution to National Service in the field of Medicine at an Investiture Ceremony at Government House at Bath Plain on September 09, 2021

NIA CHARLESTOWN NEVIS (September 09, 2021) — Dr. Albert Linton Liburd Sr. was presented with the 2020 Medal of Honour for his outstanding contribution to National Service in the field of Medicine. Her Honour Mrs. Hyleeta Liburd, Deputy Governor General on Nevis, made the presentation at an Investiture Ceremony at Government House in Bath Plain on September 09, 2021.

He is one of the three Nevisians awarded with the medal for 2020 by Sir Tapley Seaton, Governor General of St. Kitts and Nevis at an Investiture Ceremony at Government House in St. Kitts on August 17, 2021, however, Dr. Liburd was unable to attend.

According to his profile, Dr. Liburd who was born in Brown Pasture in 1940,  developed a burning desire at a tender age to become a surgeon, following an accident in which he almost lost one of his toes.

His academic prowess began at the St. John’s Infant School, the Gingerland Boy School, and later at the Charlestown Secondary School (CSS) where he graduated with best results in the Cambridge, General Certificate Examinations (GCE). He then attended the Sixth Form at the St. Kitts Nevis Anguilla Grammar School where he obtained the second-best results in the Cambridge Advances Level examination and was awarded a scholarship.

Dr. Liburd became a resident surgeon at the UWI, the Long Island Jewish/ Hillside Medical Centre and at the Queen’s General Hospital in New York.

One memorable event which he says he continues to be proud of, as part of his tenure in Jamaica in 1976, was being a part of a team of doctors who performed vascular surgery on members of Bob Marley’s band who had suffered serious gunshot wounds.

Dr. Liburd pursued his medical profession in Jamaica and Trinidad and Tobago as Registrar in Neurosurgery, Paediatric and General Surgery.

The accomplished Nevisian doctor was among the first team of doctors to perform open heart surgery at the UWI Hospital in Jamaica. He served as Medical Superintendent at the Alexandra Hospital in Nevis, and also as surgeon for a short time at the Joseph N. France General Hospital in St. Kitts before his resignation from that health facility and subsequently leaving the Federation.

In 1984 with the acute shortage of medical practitioners on Nevis, Dr. Liburd realized that the vast knowledge, experience and skills he had acquired over the years were sorely needed. Despite the numerous job offers he had received overseas, his decision to return home was easy.

On his return to Nevis, he “established the Liburd Medical Centre at the Liburd Foundation House, and was the first surgeon to introduce office surgery in Nevis. He was appointed Medical Advisor to the Executive committee of the St. George’s and St. John’s Senior Citizens Home when it was established in 1993, and served the facility with distinction for many years.

“He is extremely passionate about his profession and always aims to deliver the ultimate in medical service to which many patients can attest…Dr. Liburd experiences a sense of pride and gratitude in helping humankind in whatever way he could. However, due to failing health, he retired from his medical practice in 2017 but continues to give advice to his successor, Dr A. Linton Liburd Jr.,” his profile said.

Dr. Liburd expressed gratitude to God Almighty, his parents and siblings, his wife and children, his extended family and many friends and colleagues who have assisted and supported him in this legacy of medicine.

Meantime Hon. Mark Brantley Premier of Nevis and Minister of Health, lauded Dr. Liburd for his accomplishments and his contribution to the development of Nevis in the field of Medicine.

“I’m happy despite the difficulties in terms of health that you are able to be here sitting next to your lovely wife Carla Blackett now Carla Liburd, your son who is here, your family members and well-wishers who are here, and in the presence of Your Honour our Deputy Governor General and all who are gathered in this very historic place, Government House.

“I believe it’s a fitting place to recognize someone who has made us all proud, and so Dr. Liburd with those few words I want to congratulate you, and to say how proud we are that Nevis has produced sons such as you.,” he said.

Also present at the ceremony was Hon. Hazel Brandy-Williams, Junior Minister of Health in the Nevis Island Administration.