Opening Ceremony of New Cotton Ground Police Station
Charlestown Nevis (Friday, December 23, 2011) — Premier of Nevis, the Hon Joseph Parry has reminded Nevisians that investors, both local and foreign, cannot set up businesses in a country where criminal activities are common and when that happens the government will not be in a position to develop the island to its maximum potential.

“Do we understand that it is difficult to develop a crime-ridden country?” Premier Parry posed on Thursday, December 22nd during the official opening ceremony of the Cotton Ground Police Station in the parish of St. Thomas. “Why would the visitors feel comfortable here if we have a bad reputation?”

Premier Parry said that criminal activities are not perpetrated by politicians but by ordinary people from across the entire political divide. He said that what might appear to be simple crimes, end up tarnishing the country when such information gets on the internet.

“When one comes to me and says my daughter needs a job, my son needs a job, I really don’t have that job to give them,” said Premier Parry. “But if the country is peaceful, and if people are behaving themselves, and investors local and foreign feel comfortable you will have jobs because they will invest in this country. We need to make the connection.”

He gave the example of when the police recently accosted a suspicious young man, and there was an outcry that the police were rough and not reasonable, and when members of the Delta Force (made up of police officers and defence force personnel) were sent to Nevis after a spike in criminal activities, persons claimed Nevis had gone back to the days of Premier Robert Bradshaw.

He said that the people of Nevis need to put their support behind the police.

According to Premier Parry, people need to understand that with the behaviour and actions of some of the criminals and their easy access to guns, the police have to make the criminals respect them. If the public goes against the police, they are strengthening the criminals, and that way undermining their own selves, because the police are not going after the criminals to help themselves, they are helping the community. 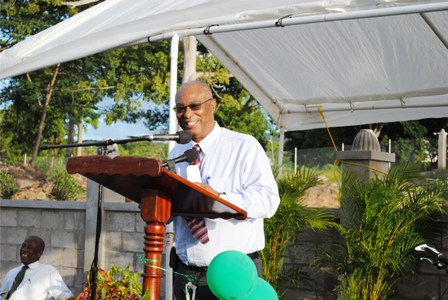 “Delta Force came over and the criminals disappeared,” reported Premier Parry. “What does that have to do with a man (Premier Bradshaw) who died thirty years ago? They are over here to protect us. They are over here to make those who want to raid,  rob and break in and do the wrong things, go in their holes and hide. That is where they belong, in their holes and if they come out, the police must make them go back in. Isn’t that what we want as a community?”

Built at a cost of EC$1.3 million, the Cotton Ground Police Station is the third major investment by the NRP-led Nevis Island Administration to make the work of the police in Nevis much easier. Police barracks have been built at Butlers and at Belle Vue. The Premier thanked former police commissioner, Mr Austin Williams, former Superintendent of Police in Nevis, Mr Samuel Seabrookes, and the current Superintendent Mr. Hilroy Brandy for their contribution towards the building of the police station.

“The work that we have done as a government, we have done it not because we simply love the police, but because as a government we have certain objectives for the country,” stated the Premier. “The first objective is for all our people to be gainfully employed. Whatever we do, it boils down to the point that we want to see all Nevisians working.”