The Federation’s highest Police Officer was at the time delivering remarks at the dedication and official opening of the new Cotton Ground Police Station in the entrance of Cotton Ground Village on December 22, 2011. The new facility was constructed by the Nevis Island Administration (NIA).

“I assure you residents of Nevis that the Royal St. Christopher and Nevis Police Force are dedicated to your protection and I would like us to demonstrate the Government’s vision of security, by providing the service that is needed in this community.

“The Police and the Government of the Federation are dedicated to the increased security of citizens in Nevis,” he said.

The Commissioner said he was proud the new Police facility had a community room in which neighbourhood watch meetings, training and other special events for the public could be held.

He noted that the building belonged to the community and wanted members of the public to feel comfortable visiting the Police Station especially as public faith in the Police was on the rise. He also extended an invitation for Nevisians to become part of the Police Force. 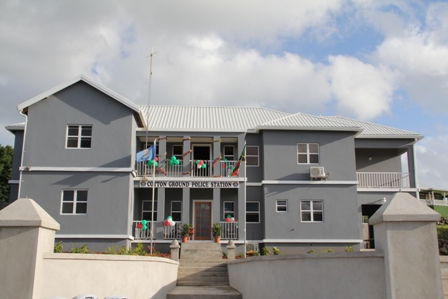 “Public faith in the Police Department is continuing to grow and our image continues to improve. We are also recruiting 40 Police Officers from both St. Kitts and Nevis [and] we would love to have some applicants from Nevis.

“Please visit the Charlestown Police station [and] make application. They will explain the rules of employment. I would love to see Nevis represented in the next recruit class in February 2012,” he said.

Mr. Walwyn who was sworn in as Police Commissioner four months ago, reiterated his commitment and that of the Officers in the Nevis Police Department to the People of Nevis and noted the organisation had done much to become more involved in the Nevis community and more visible to the Citizens of St. Kitts and Nevis.

“We have also tried to be as transparent to the public as possible. I appreciate that the Government and residents of the Federation have placed faith in me to lead this wonderful Organisation. With this new facility, we are now poised to grow as a Department and become an even better agency.

According to Director of Projects in the NIA Mr. Denzil Stanley when he presented an overview of the Project, the facility’s ground floor houses a reception area, guard room, interrogation room and a conference and meeting room. There are also five rest rooms two of which are for the visiting public.
“There is a cell block of two holding cells and available bathroom, a laundry room, storage room and of course the garage. 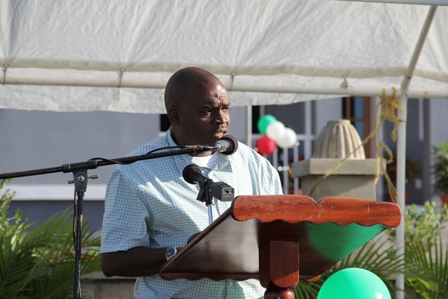 “Comparing the then and the now, I am sure all would agree with me that this building is a wonderful one. I am also sure that the Police Officers who are stationed here would have already found it to be much more comfortable and more conducive to work.

“The Officers in Cotton Ground would have endured and agitated for long and now your prayers have been answered. It is your home away from home. It is your office. It is for you. As you go about your daily task of protecting Cotton Ground and surrounding communities, do so with pride as this building should help boost your policing morale,” he said.