The momentous event attracted scores of Nevisians who filled the market complex and lined the streets that border it: some to celebrate its renaming in honour of former market keeper George Mowbray Hanley and others to observe the upgrade work that had been done.

Mrs. Claxton-Liburd, who spoke, in a brief address, on behalf of the vendors, recounted the many challenges experienced with the previous structure but expressed satisfaction with the new facility. 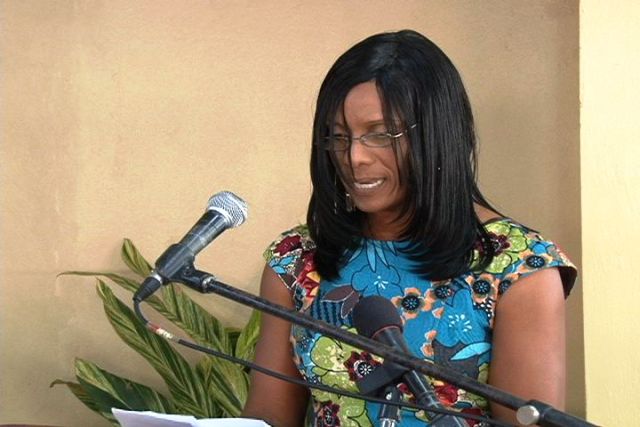 “Thanks to all my colleagues here for continuously complaining. Thanks to the Honourable Joseph Parry and his government for listening to our complaints and thanks to the Department of Agriculture for delivering this new building,” she said, adding that the market vendors were sincerely thankful that they were now “more comfortable” in their place of employment.

“Thank you, thank you thank you,” she exclaimed as the vendors, together with government officials and onlookers thunderously applauded her.

Like Mrs. Claxton-Liburd, Mr. Cyrillon Hanley, son of the late George Mowbray Hanley, participated in last Friday’s ceremony. Speaking on behalf of his family, Hanley expressed pride that his father’s service to the Charlestown community was finally recognised.

“If he were here, we know that he would have been well pleased to see what has been done in terms of the building upgrade and he would have been honoured to have this edifice bear his name,” Hanley said and publicly thanked the Nevis Island Administration for the honour. 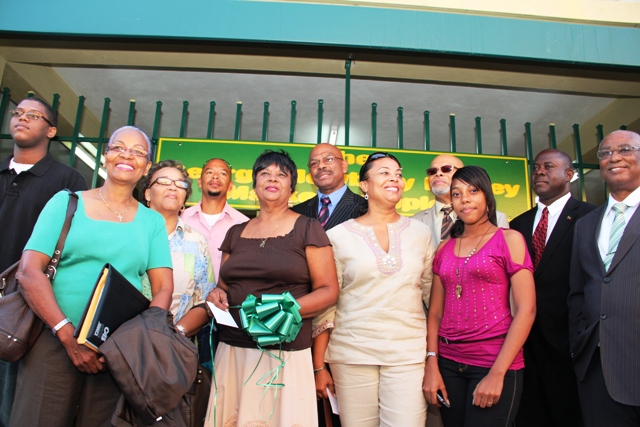 “I would like, on behalf of our dad, my siblings: those represented here and those who are with us in spirit, to thank the Nevis Island Government especially the Premier and his Cabinet, the Minister Honourable Robelto Hector, under whose portfolio markets fall, and the Permanent Secretary of Agriculture [Dr.] Kelvin Daly for the posthumous honour bestowed on our dad.”

While presentations by the island’s Premier, the Honourable Joseph Parry; Permanent Secretary in the Ministry of Agriculture Dr. Kelvin Daly; and Communications Officer at the Department of Agriculture Mr. Eric Evelyn were well received, the heartwarming words of Agriculture Minister and St. Paul’s Parish’s Area Representative the Honourable E. Robelto Hector seemed to evoke a feeling of pride in the event’s attendees.

“As a government, my colleagues and I felt the need for the public to have a new structure as the cosmetic work attempted in the past was not sufficient to solve the existing problem,” Minister Hector outlined.

In addition to challenging the vendors to care for the facility and capitalise on its potential to foster “greater economic activity,” the Agriculture Minister recorded appreciation to the persons and businesses that contributed to the opening of the new complex. 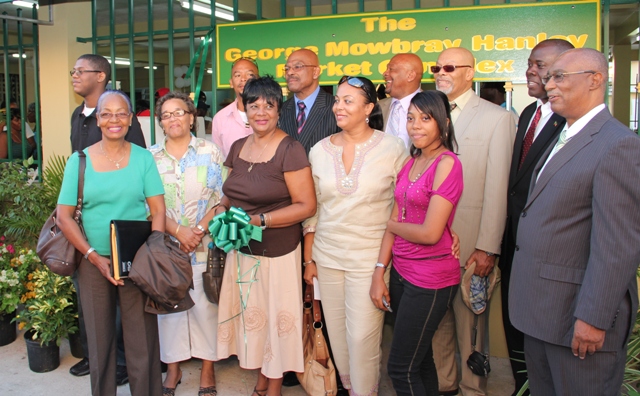 Among those lauded were the Chamber of Industry and Commerce; the departments and ministries within the Nevis Island Administration [NIA], particularly the Ministry of Agriculture and the Public Works Department; Marcel’s Metal Works, Permanent Secretary Daly and his predecessor Mr. Pearlievan Wilkin.

“As your government, we have time and time made the call for us as Nevisians to recast our society in the likeness and image of Nevisians who contributed positively to our society’s advancement,” Minister Hector said as his presentation shifted to address the contribution of the honouree whose name, effective Dec. 16, was affixed to the eye-catching structure, adjacent the Charlestown Harbour.

“Mr. Hanley’s name is written among the many others we have sought to memorialise. Those of us who knew Mr. Hanley can recall the pride and joy he took in his job as market keeper,” Minister Hector stated.

Formerly the Charlestown Public Market, The George Mowbray Hanley Market Complex received a monetary injection, by the NIA, of more than $1.2 million