NIA CHARLESTOWN NEVIS (August 16, 2012) — A group of Nevisians living in Canada continued their contribution to the development of their homeland on August 14th, 2012, when they provided financial assistance in the areas of education and health. The ceremony was held at Rodney’s Cuisine, Stoneygrove.

The NevCan Cultural Association made presentation to Ms. Anjonic Browne of Newcastle and Ms. Nelita Williams of Hamilton Estate who will enter the Charlestown Secondary School in September and to Master Antonio Mills of Clay Ghaut, Gingerland and Master Clevin Maynard of Stoney Hill who will attend the Gingerland Secondary School.

A cheque of an undisclosed amount was also presented to Ms. Rodney Elliott to defray expenses incurred for critical heart surgery undergone by her grandson Master K’yun Elliott when he was still a newborn.

According to the group’s Vice President Mr. Hugh Jeffers, the students were selected after they had submitted applications and relevant references for the scholarships. He said their applications indicated they had excelled in school and were committed to serving their respective communities as well. 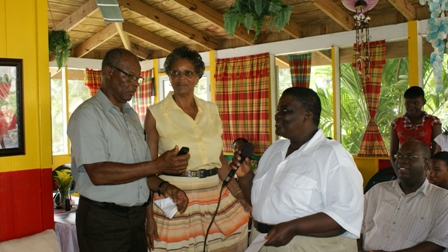 The part scholarships are renewable on an annual basis for a maximum of five years but in order to gain renewal the students had to maintain good academic standing and continue to make contributions in the community.

“This money would be allotted to you each year if you are qualified. That means you would have to keep up your academic standard, you have to do your community work and so on. If these standards are kept up you notify us, make an application again next year and you will more than likely be in again for another year.

“We will continue to pay this amount for the next five years you are in high school. It’s a help it’s not a complete scholarship it is a help. So all I am asking you is to keep up your good marks, keep up your standard and everything would be alright,” he said.

The students standing in school and in the community will be verified each year by the student’s submission of an academic report from their school and a personal letter of reference from a community leader on their behalf.

Meantime, Mr. Jeffers commented on the small number of students who applied for assistance from his Canada based Organisation in recent times and urged them to take advantage of the offer.

“During the years I noticed a few students [applied]. We sent out the application, we asked them to apply but to me enough students didn’t apply. Whether they didn’t get the information or whether they were afraid, they didn’t think they qualify but listen- anybody qualifies. 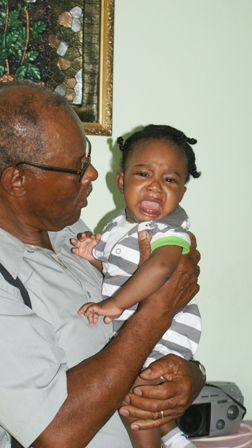 “You can put in your application it goes over to a few members of NevCan, the Executive looks it over and it goes back to the membership and they decide who they think according to the application, according to the information we got who will receive the scholarship. It is not a complete scholarship. It’s some money to help you pay some of your debts. It is specialised for certain things,” he said.

According, to the Vice President, the Organisation had a representative on Nevis in the name of Ms. Agnola Tyrell who would manage the funds available for the students.

Regarding the assistance given to the Elliott family, Mr. Jeffers noted that his Organisations not only offered help to students but to anyone who was in crisis. He explained that although everyone who applied did not receive, however, this time around Ms. Rodney Elliott was given assist to help with medical expenses for her grandson.

In response, the students thanked the Organisation for its assistance and pledged to give their best while Ms. Elliott also expressed gratitude on behalf of her grandson for the assistance.

Also present were Deputy Principle of the CSS Mr. Juan Williams, parents of the scholarship awardees and other members of the Association.