Mr. Daniel was at the time delivering remarks, at a brief but significant handing over ceremony of a donation from the Charlestown Seven Day Adventist Church to the Hospital’s Laboratory. The event took place at the Health Facility’s conference room on August 08, 2012.

“This is not new but if we have 62 churches on Nevis and every August some of them bring some gifts, it would be wonderful and since we have 12 months of the year, we are mindful that some other church or denominations will come because the people who use the services at the hospital are themselves church members…

“The Hospital is everybody’s hospital, everybody’s arrow points here. As I said before, no matter what happens, even if you have the money to travel in an air ambulance, they only pick up people from hospitals and this is the only one we have in Nevis. So I would like all of us to bear that in mind, whenever we have the resources available or if need be, we need to mobilise the resources through voluntary efforts,” he said.

Minister Daniel also thanked the SDA for its invaluable contribution to the health services on Nevis and asked the Pastor Mr. Jerry Languedoc and Board Member Mrs. Verina Williams who were present, to convey the Ministry’s deepest gratitude to the rest of the Board. 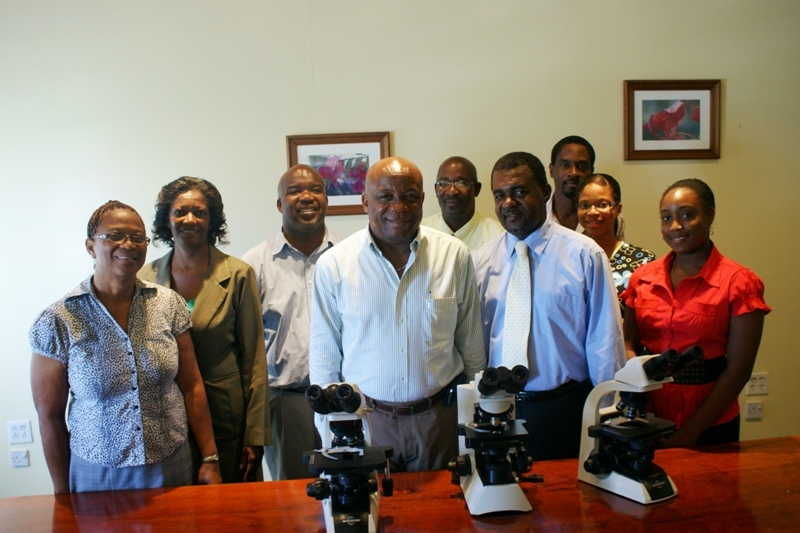 “So given the fact that you provide the spiritual food on the weekends and during the week, we in the Ministry of Health have to deal with the physical part and so we thank you for that connection,” he said.

Mr. Daniel also urged the staff at the Lab to care for the microscope even though they were donated. He said there was a perception among many that once something was donated, it came free but in actuality that was not the case.

“Sometimes people think when they [gifts] are donated they are free. It does not mean that they are free it means that we have not paid for them directly but someone else has. So please instruct all of the officers at the Department to exercise great care and caution when using the equipment …

“I want you to care them so that we could show that we value their [the SDA’s] contribution and also, I want to urge the Lab to let the public know some of the things they do because there is a perception that when you live in small communities, that we can’t do certain things here, simply because of the fact that we are small,” he said.

Meantime, while he presented the gifts on behalf of his congregation, Pastor Languedoc deemed it a joyous moment for the Church.

“It is a joy for us at the Seven Day Adventist Church to assemble at this great place to present a gift to the Hospital, the Lab. So on behalf of the Seven Day Adventist Church of Nevis, it is my joy to present to the Hon. Hensley Daniel and his Permanent Secretary Ms. Angelica Elliott, these three beautiful microscopes. We believe that it is a need, we felt the need and we saw the need in being co-partners with you…

“We pray and trust that God will use it [gift] to further the calls in the health aspect on Nevis, so we are going to bless you as you receive these three microscopes on behalf of the Seven Day Adventist Church on the island of Nevis,” he said.

Other remarks came from Permanent Secretary in the Ministry of Health Ms. Angelica Elliott. Also present was the Acting Hospital Administrator Mr. Johnson Morton, Medical Lab Supervisor Mr. Clester Roberts and other staff from the Lab.