NIA CHARLESTOWN NEVIS (August 15, 2012) — The Medical Laboratory at the Alexandra Hospital received a gift from the Seven Day Adventist (SDA) Church in Charlestown,  which they say would greatly enhance their diagnostic services to the Nevis public. The gift of three top of the line microscopes valued at EC$15,000 was donated on August 8th, 2012, at a handing over ceremony at the Alexandra Hospital’s conference room.

Medical Lab Supervisor Mr. Clester Roberts in brief remarks in response to the equipment which was handed to him by the Acting Hospital Administrator Mr. Johnson Morton thanked the Church for its timely donation which he described as important additions to the Lab’s equipment.

“On behalf of the Lab, [I] thank you very much for the microscopes. We know the value of the microscopes and we know how important it is to our work, so be assured that we will take great, great care of it because we don’t know when again we will be getting gifts like this,” he said. 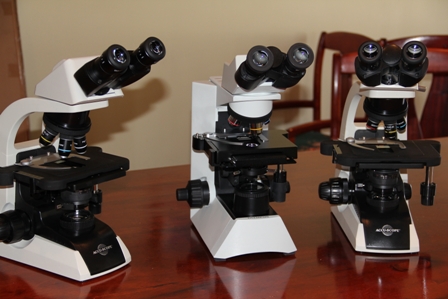 Mr. Roberts also thanked Mrs. Juline Grant one of his staff members who had become aware of the Church’s interest in making a donation to the medical facility.  He said she was a new worker at the Lab and had seen the need for that particular equipment since there was only one functional microscope there which had to be shared among staff.

The Hospital’s Administrator also expressed gratitude to the SDA Church for the equipment and assured that the microscopes would be put to maximum use.

“On behalf of the staff at the Alexandra Hospital, we would just like to express our great gratitude and appreciation for these wonderful microscopes. We can assure you that they will be put to full use. I myself have been amazed at some of the things they are able to do in this little lab here in Nevis.

“We would like to thank you very, very much on behalf of the staff here. We know that the hospital is heavily reliant on donations by the general public so your gift perhaps will inspire other organisations to step up and do likewise,” he said.

Meantime, Mrs. Verina Williams a Board Member of the Church explained how the gift came to be. She said for some time they had received special donations and gifts from church members and others in the community.

“Initially it began when we thought that a heart machine would be a great thing to donate to the hospital and at this point in time we recognise that it was crucial for the Lab to receive some microscopes and we voted on our Church Board, that is the Charlestown Seven Day Adventist Church, to move forward and purchase the microscopes for the Lab Department,” she said.

According to Mrs. Williams, prior to purchasing the microscopes they consulted with Lab personnel to ensure they bought the right equipment.

“We tried to get the best [and] we worked with the lab technicians there. They are the ones who actually choose the microscopes that would be best served in their department and working along with them, here is the reality of three microscopes of their choice that cost $15,000. We are happy to have to donate this to the hospital at this time,” she said.