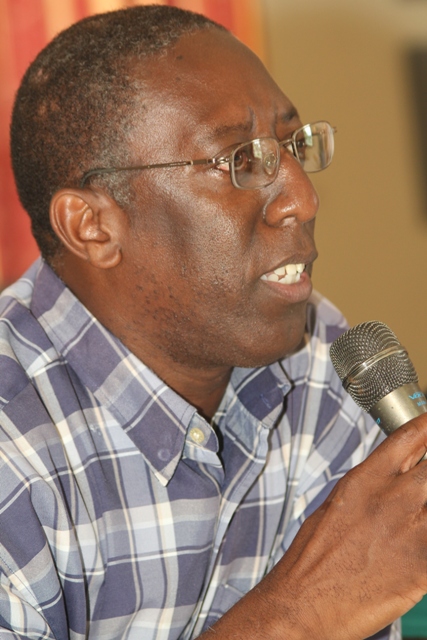 Executive Director of Culturama Antonio Liburd (file photo)
NIA CHARLESTOWN NEVIS (March 12, 2014) — Executive Director of Culturama Antonio Liburd, extended an open invitation to members of the press and the Nevis public to attend a promotional activity at the Cotton Ginnery Mall Garden on March 13, 2014. It will mark 140 days to the official Culturama 2014 activities slated for July 25 to August 6 and is expected to commence at 4:30 p.m.
In an interview with the Department of Information on March 12, 2014, Liburd gave some details about the event.
“The activity is called 140 to C40 Mega Weekend Countdown. Tomorrow will mark 140 days to the start of the Culturama weekend of August 1st.   Deputy Premier and Minister of Culture Hon. Mark Brantley will announce the Patron for Culturama 40, as well as accept the sponsorship presentations from Platinum sponsor LIME and Carib Breweries Ltd. and unveil the official Culturama 40 calendar of activities.
“The new Nevis Culturama Festival website will also be launched at Thursday’s event,” he said.
Culturama 40 will be celebrated with the theme “Revelry, Splendour, Creativity; It’s Culturama 40!”
Culturama started in 1973 by the Nevis Dramatic and Cultural Society (NEDACS) and according to the Culturama Executive Director, the anniversary has been celebrated over the years.
“It’s customary every 10 years that the Culturama Committee would observe the anniversary from the inception of the island’s foremost cultural activity. However, this year the observance will take a different format with the introduction of a Homecoming celebration.
“It was designed to encourage Nevisians and descendants of Nevisians in the diaspora, to return to rekindle their historical and emotional bonds with their homeland. The planned celebration has so far generated interest and we already have confirmation that a group of over 100 persons from England will be returning. We also have groups coming from Canada and the United States Virgin Islands,” he said.
The Culturama Committee is made up of volunteers charged with the responsibility of organising and managing the annual summer festival. This year it is headed by Deborah Tyrell.