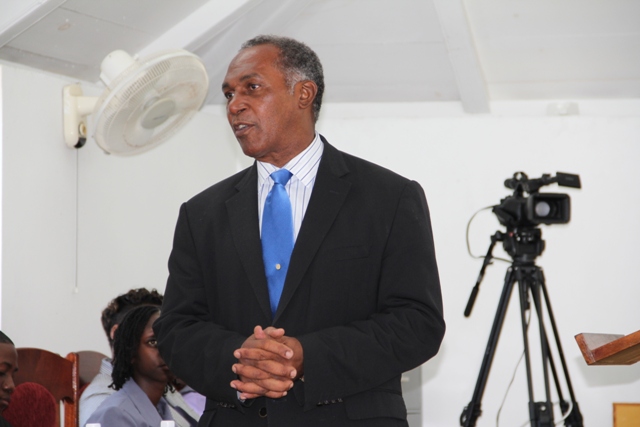 Premier of Nevis Hon. Vance Amory making remarks on conclusion of a sitting of Youth Parliament at the Nevis Island Assembly Chambers on March 10, 2014, in observance of Commonwealth Day
NIA CHARLESTOWN NEVIS (March 11, 2014) —  Premier of Nevis Hon. Vance Amory could not hide his satisfaction with the performance of students from the Charlestown and Gingerland secondary schools who participated in a Youth Parliament sitting at the Nevis Island Assembly on March 10, 2014.
Mr. Amory who, at the end of the debate, was invited to give a brief comment by President of the Assembly Hon. Farrell Smithen, stated that the student’s performance made him feel proud.
“I think our Youth Parliamentarians have done a wonderful job and I want to congratulate you… I feel proud of our children. I feel proud of you and I want you to know. I say this from the bottom of my heart. I feel proud of you,” he said.
The Premier also used the opportunity to urge the students to see the event as a challenge but also as a learning experience for their personal development.
“It is also an opportunity for all of our young students to develop their own intellect and their own abilities to research and to express themselves because this is something that I find very challenging for us in Nevis and maybe in the whole Caribbean, that I am detecting a weakness in our people generally, to express themselves and to communicate effectively.
“This exercise which the young Parliamentarians have engaged in this morning which I hope …you will take the opportunity and encourage others to see this as a challenge, also as an exercise for personal development, in self-confidence, in becoming au fait with the language and also, to take an interest in issues which are affecting our country,” he said.
The topic debated in the Youth Parliament was “Capital Punishment Act, 2014” and according to Mr. Amory, it brought greater awareness to the issue, a matter which he believed needed discussion.
“Do we think of capital punishment?…No we don’t unless something happens and we hear it on the news but the work which you did this morning in discussing the issues surrounding capital punishment, the work which you have done in bringing an awareness to us of the fact, let us all not just see it as an exercise here but see it as something which we can use as citizens of the country to address our own minds to it. We must see this as something which we have to begin to address.
“I ask you what is the benefit? What is the effect of having capital punishment? What is the effect on our society? How do we begin to get people to see that here is something which is important for the country?” he said.
The Premier also addressed other important matters which came out of the debate.
“What do we do and how do we see our economy? How do we see tourism? How do we see other effects of investments? These are for me the issues.
“There may be political overtones and undertones, even though I am a political figure myself, [which] are sometimes based purely on emotion and the substantive issues are not being discussed,” he said.