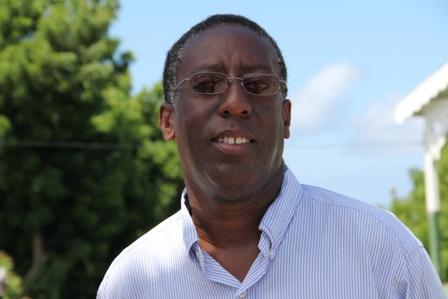 NIA-CHARLESTOWN NEVIS (July 21, 2011) — A call was made to Nevisians to support Culturama 2011 celebrations and to use the event as a time of healing.

Executive Director of the Culturama Secretariat Mr. Antonio “Abonaty” Liburd issued the appeal in an interview with the Department of Information at the Cultural Complex on Tuesday. He was at the time providing an update on ongoing preparations for Nevis’ foremost cultural summer festival which commences on July 21 to August 02 under the theme “Culturama 2K11 truly a cultural experience”.

“We are extending an invitation to all persons to come and participate. Elections are over, come and let the country heal during Culturama … unwind and let us be friends, let us reunite during this Culturama celebrations.

“I just want to appeal to persons to have a peaceful and crime free Culturama let us enjoy it in 2011,” he said.

The celebrations come on the heels of a keenly contested local election which concluded just over one week ago and according to Mr. Liburd the activities slated for this year’s celebration will be aplenty after the grand launch at the Charlestown Waterfront on Thursday afternoon.

The day will kick off from 2pm with the Defence Force Band engaged in an activity called CT Invasion.

“They will be playing some matching tunes through Charlestown just to get the place hyped. The excitement to that would be the songs they would be playing would be past Culturama hit songs.

Another activity slated ahead of the launch is Pan in de Street in which two steel pan bands – one at the Memorial Square across from the National Bank and the other in the Taxi stand on the corner of First Caribbean Bank International Bank and the A L Evelyn Building. They will provide musical entertainment from three to 5:30 pm.

At the launch, Premier of Nevis Hon, Joseph Parry will officially declare Culturama 2011 opened while Minister of Culture Hon. Hensley Daniel and Chairman of Culturama Mr. Halsted “Spooty” Byron will be among those who will deliver remarks. Participants for all the major shows will be formally introduced to the public.

The patron will be presented with a plaque and tickets for the official events for the season and the slogan winner Mr. Shadeo Browne will also receive a plaque and passes to the Culturama events. After cultural presentations, the event will climax with a fireworks display.

Immediately following will be the first contest of the season – the Junior Calypso Competition with backup music provided Rohan Claxton and the Eclectic Band.

After the show will be musical entertainment provided by The Kore from Nevis and KC5 from St. Kitts in what Mr. Liburd said would be in an atmosphere similar to that of a mini music festival.

“It is an activity we are hoping will go right down till 3 o’clock the morning so persons can come to the launch from two or here in the afternoon and go right down until three in the morning. So it’s like a 3-3 activity in the heart of Charlestown come this Thursday,” he said. 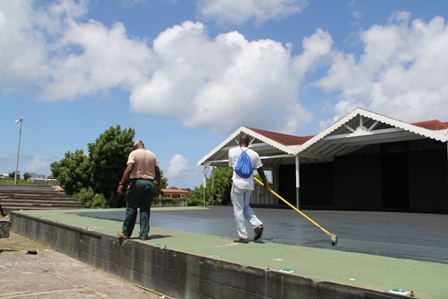 Ongoing preparation work at the Cultural Complex in Charlestown, the main venue for Culturama 2011 activities

On Friday July 22nd 19 calypsonians will take to the stage in the TDC Group of Companies sponsored Senior Kaiso Monarch Contest at the Cultural Complex. Back up music will be provided by the Cassanova band.

Saturday July 23 will be the Clash of the Bands at the Cultural Village in which six local bands will vie for supremacy. A DJ contest will also take place between five disc jockeys.

“Some six bands are carded to perform in the King of the Jungle Band Clash we have The Kore, Cassanova, Ultimate, Ultra Sonic, Exhibit and the defending Band Clash Champions the Odyssey Band.

Mr. Liburd also pointed to the Miss Culture Swimwear Contest twinned with the Mr. Kool competition scheduled for Sunday July 24th at the Cultural Complex and the Miss Caribbean Culture Queen Pageant Swim Wear competition which will be held that same night in St. Kitts. Part two of the regional pageant will be held at the Cultural Complex in Nevis on Monday July 25th. The event has attracted participants from 11 islands including host county Nevis.

The Nurses on Nevis also form part of the calendar of events for Culturama 2011, with a concert at the Cultural Complex on Wednesday July 27th. On July 28th from 8pm the LIME sponsored Mr. and Miss Talented Teen contest will take place at the Complex.

On Friday July 29th from 9am will be the Agriculture Fruit Festival and later that day the TDC Senior Kaiso Monarch finals which was moved up one day sooner will be held.

“The Calypso Final is usually on a Saturday but because we have extended the Food Fair on Saturday, we have now brought the Senior Calypso Finals to the Friday night.

“On Saturday we move to the Villa Grounds from 7am till midnight we have an all day Cultural Food Fair. Persons have been asking for that. They have been saying at 7 o’clock when the Food Fair ends they are just getting into the groove, persons are still coming and the vendors still have a lot of food so we have extended that right up until 12 in the evening,” he said.

An International Drag Race will take center stage at the St. James Raceway on Sunday July 31st and later that day, the races will give way to the Miss Culture Pageant from 8pm at the Cultural Complex. Six contestants are expected to vie for the coveted title.

On Monday will be the Bacchanal Emancipation J’Ouvert from 5am when all the bands will take to the streets of Charlestown till midday. 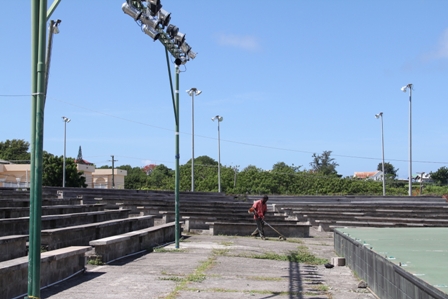 Cultural Complex grounds get a facelift too

“J’Ouvert will end at 12 o’clock it is not going to go any longer. It does not make any sense for persons to complain for J’Ouvert ending too early. It is going to end at 12.

“Then there is another activity at the Pinneys Beach hosted by Randy of the Lime Beach Bar for the Culturama Cool Down. That activity is going to fill the slot for Emancipation Monday afternoon,” he said.

The final day of the Festivity will be the grand Street Parade of troupes and last lap jamming in Charlestown which will bring the curtains down on the two week 2011 Culturama celebrations promptly at 8pm.

“We have a number of troupes registered both senior and junior and a number of schools and a number of community groups are on board with us this year. I want to make this clear, once the bands would have accompanied the troupes to the Complex, they will return to the streets to begin the last lap so persons who do not want to pay $10 to come into watch the onstage display, can go on the streets of Charlestown with a band of their choice to jump up.

With regards to the Cultural Village Mr. Liburd noted that the facility would be opened throughout the two week festivity from Friday night until the Friday after Culturama. He said nightly entertainment would be provided throughout for the benefit of the public and booth owners.