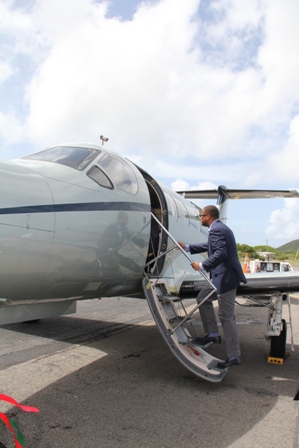 Deputy Premier and Minister of Tourism Hon. Mark Brantley taking a look at an aircraft from Tradewind Aviation’s fleet on the tarmac of the Vance W. Amory International Airport on November 02, 2013
NIA CHARLESTOWN NEVIS (November 05, 2013) — Members of the Nevis public were called on to take advantage of services offered by Tradewind Aviation, since it was not only for visitors to the island.
The recommendation came from Deputy Premier of Nevis and Minister of Tourism Hon. Mark Brantley when he delivered remarks at a ceremony which marked the inaugural flight of Tradewind Aviation to the Vance W. Amory International Airport at Newcastle on November 02, 2013. The airline was the most recent to include Nevis in its daily itinerary.
“I wish to record for the public especially that this is not just a service for tourists, for people coming into the island. They [Tradewind Aviation representatives] have indicated that they have also now published introductory rates for local travellers, which when I look at those rates, are really competitive with anything else that is available,” he said.
Mr. Brantley noted that the Administration had also paid particular attention to make travel comfortable and available to the Nevisian public.
“I want the general public to understand that what we are trying to do as an Administration, is to make travel comfortable and available through our own airport here on Nevis for all of our people and so, the tourists we welcome them to use the service certainly but local people as well, you are going to have special fares available to allow our local travelling population to enjoy the services,” he said.
According to Mr. Brantley, the airline will fly for 55 minutes, high and fast, nonstop from San Juan in Puerto Rico to Nevis in air-conditioned comfort with two pilots. It will also have wine and beer available for interested passengers on the flights.
“It is really a premium service afforded not just to our guests but also to those of us who travel locally. So Tradewind, what can I say? We are really, really grateful that you have come. I think this is the start of a really good, long-term relationship as we try to build and grow the jurisdiction.
“I am very excited about what is happening in Tourism on the island and I am very excited that this government is holding true to its commitment to bring back air traffic into the Vance Amory International Airport,” he said.
With regard to the additional airlift created by the new service Mr. Brantley explained that when he took office in late January, the Administration had met a daily capacity of 14 seats into and out of San Juan along with other airlines which had provided some service. However with the introduction of Tradewind, there would be an additional 16 seats available on a daily basis which would take the daily capacity to 30. 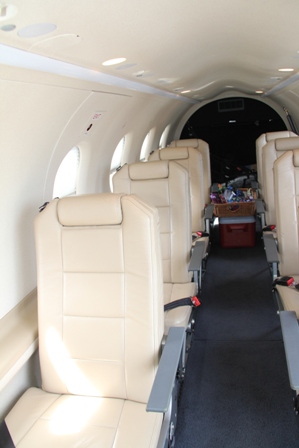 However, he added that Tradewind Aviation had indicated that it had the capability to increase or decrease its capacity based on demand.
“I am being told that they have the capacity to add legs as and where it is necessary even though you see maybe one plane with eight seats and you start booking they have the capacity to add two, three, four flights as is necessary. So I think it’s an absolutely wonderful idea, wonderful service for us,” he said.
The Minister also used the opportunity to thank the stakeholders, among them local hoteliers who had supported the Administration in its move to attract additional airlift into the island.
“I am very grateful that all of you stakeholders can be here today, I see hoteliers and I am hopeful that you’ll continue to support the efforts of the Administration, in really bringing us back to a place where we can all be proud once more of the industry and our capacity to deliver what our guests are looking for,” he said.