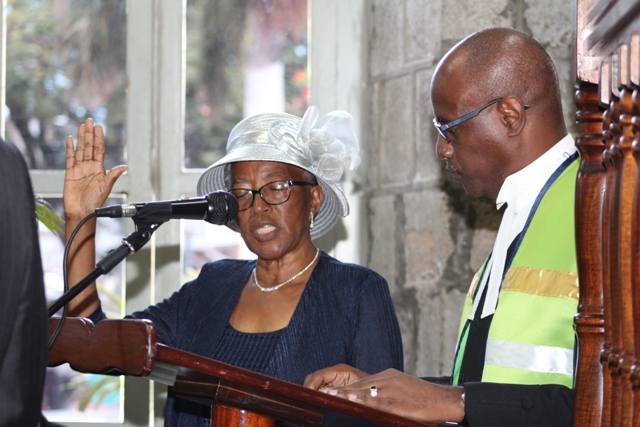 Her Honour Hyleta Liburd, the new Deputy Governor General for Nevis being sworn into office by Resident High Court Judge in St. Kitts Hon. Justin Trevor Ward QC at the High Court in Charlestown on August 31, 2018

NIA CHARLESTOWN NEVIS (August 31, 2018) — Deputy Governor General for Nevis Her Honour Hyleta Liburd says she is accepting her new position with a sense of humility, pride and a willingness to learn and grow, while acknowledging the foundation left by her predecessors.

Mrs. Liburd was at the time delivering here maiden address after she was sworn in by Resident High Court Judge in St. Kitts Hon. Justin Trevor Ward QC at the High Court in Charlestown on August 31, 2018, at the event presided over by Sir Tapley Seaton, Governor General of St. Kitts and Nevis. She thanked the governor general and the Nevis Island Administration Cabinet for the honour.

“I am grateful and deeply touched by your commendation and by the confidence and trust you have placed in me…Thank you for the distinct honour and the opportunity to serve in this new capacity.

“With God’s help, wisdom and grace and according to His will, I endeavor to meet your expectations and serve my people, the people of Nevis, with pleasure and distinction. God has brought me thus far and I trust Him to provide all I need to take me successfully forward.” she said.

The new Deputy Governor General added that she was grateful for all who God had placed in her path to care, nurture, teach, train, encourage, challenge, support and love her. She acknowledged her parents whose influence, she said, would not leave her. She also thanked her family, friends and well-wishers who were a part of a special moment for her.

Meantime, Mrs. Liburd used the opportunity to speak on values in the society. She noted that the development of a country is fueled by its people and where they are and where they are willing go, is dependent on their vision, initiative, passion and involvement.

The Deputy Governor General stated, that there are many positive things taking place on Nevis as a result of those influences, coupled with respectful interaction, planning, commitment and hard work. There were challenges along the way, she noted, but each one brought an opportunity to find a solution.

Mrs. Liburd said growing up she was taught to do things the right way and to be obedient. She encouraged the people of Nevis to be strong, resourceful and committed.

“We cannot become too weak or too indifferent to guide, to correct, to instruct and to be good examples. As we go out daily, our words, conversations, actions and attitudes speak volumes to the people we encounter.

“God, our great creator and designer, made a perfect blueprint of each one of us so we can make a positive difference where we are. He has given us one of the most beautiful places on earth to live. Let us together, capitalize on this and do the best we can. Let us seek His wisdom, guidance and help. We cannot be afraid to do and demand what is right. Let us join hands and minds and be a caring people with integrity, respect, love, forgiveness and peace,” she said.