NIA-CHARLESTOWN NEVIS (February 24, 2011) — Senior Citizens on Nevis were on the receiving end of yet another initiative, this time a new Hot Meals Kitchen. The modern facility was officially commissioned in Gingerland on February 12, 2011.

The Senior Citizens Hot Kitchen was constructed under the Basic Needs Trust Fund (BNTF) Programme 5 with joint funding from the Government of St. Kitts and Nevis, the Caribbean Development Bank (CDB) and the Canadian international Development Agency (CIDA).

Minister responsible for Social Development in the Nevis Island Administration Hon. Hensley Daniel during remarks at the Handing over and Opening ceremony, attended by senior citizens, government officials and well wishers, said the project was another step in the circle of care for the island’s citizens.

“When we got to government we (Nevis Island Administration under the leadership of Premier Hon. Joseph Parry), were serious about the development of people and we have several programmes and projects from the womb to the tomb or better said, from the cradle to the grave. We more than doubled the staff employed to deal with the care of senior citizens and now we have a large group of persons 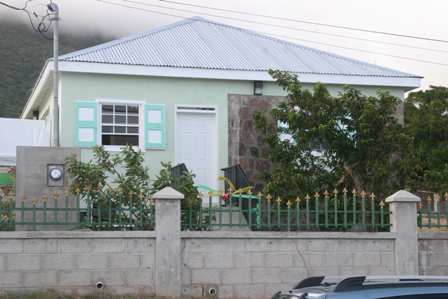 “Interestingly enough, on Sunday someone 22 years of age phoned me, asking me if there were any vacancies in the Senior Citizens Division because she would like to care for seniors. That is an interesting movement because it suggests that there is rewarding work caring for our seniors and it suggests also that you can have meaningful employment looking after seniors,” he said.

Mr. Daniel reiterated the NIA’s commitment to the senior citizens on Nevis and stated that Nevis had the most diverse programme for seniors anywhere in the Eastern Caribbean with programmes that encouraged and facilitated the development and the continued growth of elderly citizens.

The Minister who has been responsible for the welfare of Senior Citizens on Nevis for the past four years said persons should have no fear of growing old on Nevis since the programmes in place for seniors were diverse and kept them active. 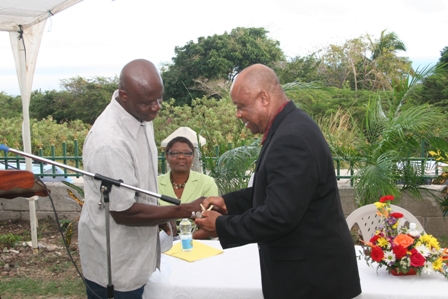 He added his personal congratulations to Mrs. Garcia Thompson Hendrickson head of the Seniors Division within the Ministry of Social Development and Ms. Sandra Maynard Head of the Social Services Department for their sustained efforts with a range of programmes for the senior citizens on Nevis.

He spoke of a recent invitation to a Seniors Movie Night Out and was pleasantly surprised on his arrival at the heart warming activity.

Mr. Daniel said the sitting NIA took its responsibility as a government seriously and sought to ensure that no group of people on Nevis were marginalised.

“When we commission this kitchen, we are saying to all of us in Nevis, there is a place for all of the elderly people and we trust that they will enjoy all of the meals that are prepared.

“We have even given you some of the cooks that used to cook at Four Seasons so you must imagine you are eating five star meals in this kitchen and precisely that is what we hope to achieve for you,” he said.

According to Mrs. Patricia Hanley who chaired the ceremony, the scope of works involved renovation of an abandoned single storey stone masonry building which measured 980 sq ft. The structure was outfitted with a new timber framed metal sheeted roof and a new tiled concrete floor. New windows, doors and plumbing and electrical fixtures were also installed.

The facility will be under the management of the Social Services Department in the Ministry of Social Development through which senior citizens on Nevis will be provided with hot meals during the week.

She said bidding for the project had attracted five contractors at the end of which consultant Mr. Emil Elms of Elms and Associates awarded Mr. James Hendrickson of Strong Joint Construction and Home Improvement since he had submitted the lowest bid.

Meantime, while he handed the keys to the new Hot Meals Kitchen to Minister Daniel, Mr. Hendrickson wished him well with his people oriented projects. He said it had come as no surprise to him that Mr. Daniel had found himself in a position to assist the senior citizens of Nevis.

“I also want to wish the Hon. Hensley Daniel success in this programme. He is a family of mine and I know him from small we grew up together and I had no problem understanding that he would be so much involved in a programme like this because I know this is exactly the type of person he is and so I just want to give him his kudos at this time,” he said.

Mr. Hendrickson said his company was pleased to have been a part of the project for the seniors and was handing over a facility that met the purpose for which it was intended. He also registered his thanks to the NIA, and the BNTF staff in Nevis headed by Mrs Myrthlyn Parry and St. Kitts headed by Mr. DeSouza.

Ms. Olivia Maynard, a senior citizen on Nevis had the honour of cutting the ribbon and she had some advice for her fellow seniors.

“We are not old people we are young people. Sometimes we wonder if those who younger than us really young because sometime the move about slow and feeble but let us continue to be strong in the Lord and the Power of his might. God give us strength. God bless this building,” she said.