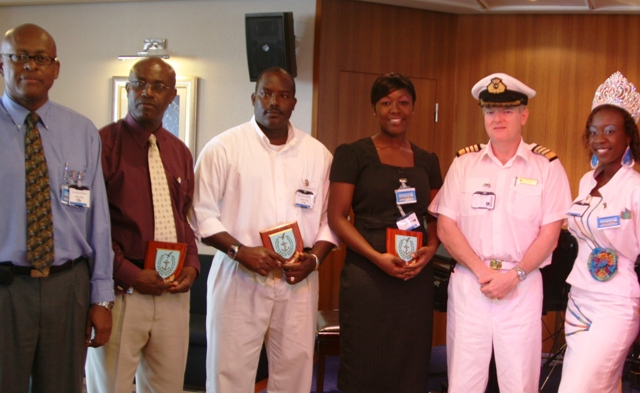 At a brief ceremony onboard the ship last week [Feb. 15] representatives from the Nevisian companies officially welcomed the Saga Pearl II’s captain and crew to the island with gifts and words of gratitude.

Leading the delegation was Tourism Marketing Officer at the Ministry of Tourism Ms. Tamica Lawrence who spoke of the relationship her ministry had developed with the Saga cruise line.

While the Saga Pearl II made its inaugural call to Nevis last week, its larger sister ship, the Saga Ruby, visited Nevis in December 2010.

NASPA’s General Manager, Mr. Spencer Hanley, welcomed Captain McLundie on behalf of the island’s Premier the Honourable Joseph Parry and the NASPA team adding that Nevis is “always grateful when ships make their inaugural calls on its shores.”

Although not his first trip to Nevis, the captain considered last week’s visit “a privilege.”

“It’s a great pleasure to bring our new ship here and we have another new ship coming next year which I’ll be on so I look forward to bringing that here.

“Nevis is like a paradise island. Thank you for having us,” the captain said adding that “the world can take a leaf out of Nevis’ book.”

“Everyone [else] is rushing around all the time. There’s rush hour and stress. I like coming to the Caribbean. When I hear the steel drum, I relax: the stress is all gone,” Captain McLundie said.

With a large number of British passengers, the Saga Pearl II will spend two weeks in the Caribbean. From Nevis, the ship sailed to St. Barthélemy [St. Barts].

The tour started on Jan. 4 in South Hampton, England and is expected to end on Mar. 22.