Chairman of the Nevis Air and Sea Ports Authority Board of Directors Mr. Laurie Lawrence

The point, made during last week’s tour of the Saga Pearl II, came from Chairman of the Nevis Air and Sea Ports Authority [NASPA] Board of Directors Mr. Laurie Lawrence.

Mr. Lawrence, who is also the Permanent Secretary in the NIA’s Ministry of Finance, said “the cruise ship sector is extremely important to the economy of Nevis,” adding that it is an area that NASPA plans to expand.

“We see many opportunities in terms of the spinoff to the economy, in terms of jobs for taxi operators, maybe restaurants [and] tours around the island so it is part of the diversification strategy and it will have a big impact in terms of the benefit to the people of Nevis,” Mr. Lawrence said.

In an interview with Tourism Marketing Officer at the Ministry of Tourism Ms. Tamica Lawrence, she spoke of the “exciting cruise ship season” that continues in March.

“We’re having a very elite ship from Azamara Cruise lines. That’s going to be here next month. It has a capacity of 700 passengers and it has decided to add Nevis to the itinerary so we are expecting three or four calls from it for the rest of the season.

“The cruise ship season is scheduled to end in April. We’re expecting two other inaugural calls: one from the MV Grand Marina and one from the World Cruise Line,” Ms. Lawrence said. 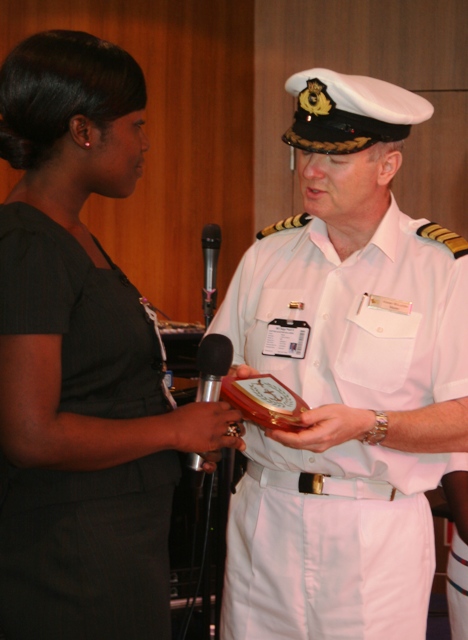 Like the other officials onboard the ship, Ms. Lawrence thanked the captain and his crew for “choosing Nevis as a destination.”

When asked why Nevis was featured on the ship’s Caribbean-tour itinerary, Captain of the Saga Pearl II Mr. Alistair McLundie spoke of the island’s tranquility and unhurried ambience.