Mr. Laughton Sargeant one of 90 survivors of the Christina Disaster 41 years ago
NIA-CHARLESTOWN NEVIS (August 05, 2011) — One of the 90 survivors from the MV Christena Disaster 41 years ago, described the annual memorial service on August 1st as an event which brought back memories of his ordeal. However, Mr. Laughton Sargeant of Cotton Ground who resided overseas said he was pleased to be a part of the event, even though the first time he attended was in 2010.

“I am very happy that I am here in Nevis to be a part of this great occasion. In 40 years last year was the first time I came back to the Memorial Service. Ossie Tyson was on the boat Fitzroy Huggins was on the boat we were all the same age and Everson Davis from Cotton Ground he was actually a year younger than I am and he also survived plus a number of others I could say my uncle Livingston Sargeant.

“I know a lot of folks who perished who did not make it. A lot of families lost parents, children, grand parents so it was a major impact around Nevis. Like I said, I was very young but as I grew older the gravity of the impact also grew,” he said at the end of the ceremony. 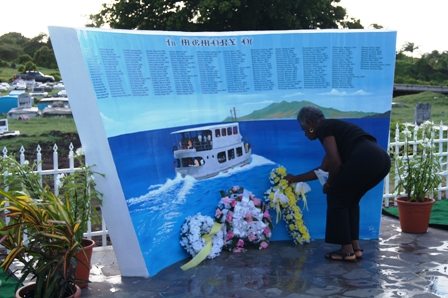 Meantime, Ms. Thelma Hunkins one of the Project Committee Members who are in charge of the project, in remarks during the Memorial Service noted that memorials not only served as a reminder of important events but also of important persons.

It was therefore thought that the erection of a memorial at the grave of 13 of the 233 victims who were interred at the Bath Cemetery, would serve as a constant reminder of all who were touched by the tragedy including those who survived and all in whose hearts the lost loved ones remained very much alive.

Ms. Hunkins also gave an insight into how the memorial became a reality. 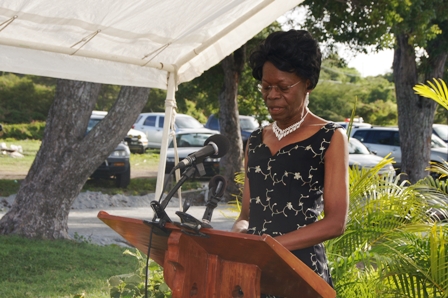 “As a result of this meeting, a small committee was given the mandate by the relevant ministry to proceed. They pursued this goal in partnership with government, the private sector and other individuals and this [monument] is the result of this very worthwhile project. We hope that this would be a memorial to the people of Nevis forever. It is an historic event which must not be forgotten because it tells volumes of our history and it is a story that must be told to generations now and generations to come,” she said.

While she thanked all those who contributed to the project in one way or the other, Ms. Hunkins also used the opportunity to appeal to the public to contribute to the continued works planned for the memorial apart from maintenance.

She said though the project looked completed, there was much work left to be done. It was for that reason the Project Committee made up of Mrs. Marjorie Morton, Ms. Marilyn Liburd and Ms. Thelma Hunkins, had opened up an account at the St. Kitts Nevis Anguilla National Bank.

“This committee has opened an account at the St. Kitts Nevis Anguilla National Bank and the number is 212-23979 and the name of that fund is Christena Memorial Fund Bath Cemetery. This is not only to ensure the maintenance of the site, you may think it is complete but we are not yet satisfied that it is complete. 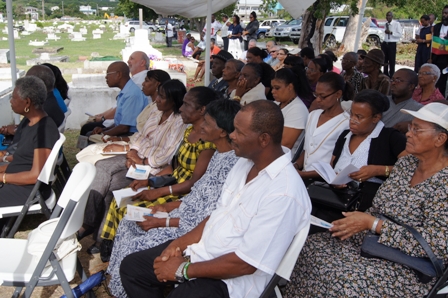 Other remarks came from Mrs. Thelma Mills who lost her mother during the August 1st 1970 disaster.

“I was just a baby when my mother Hannah Parris lost her life that ill fated day along with 232 other persons mostly Nevisians on a voyage from Basseterre to Charlestown. About 90 persons survived. Since then Nevisians and Kittitians alike have been forced to cope with the tragedy that has devastated some and made some stronger. To this day there are some persons who can deal with their loss simply because it brings back great memories.

“However, we have a lot to give God thanks for even in the face of that disaster. With great strength, perseverance and a strong belief in God, we were able to pick ourselves up and move forward with lots of hope and a new beginning we survived,” she said.

Mrs Mills on behalf of the surviving families also thanked the Nevis Island Administration (NIA) and all who organised the memorial service to mark the 41st anniversary of the Christena Disaster. She said their thoughtfulness and kind gesture certainly made their day which sometimes had the tendency to be very sad but this year they were strengthened.

“Today you lifted us off the ground with the perfect memorial you found. We appreciate as always you going the extra mile organising the service brightening our day and making us smile so in our thoughts you are and will continue to be like a strong supportive family to those who were saved and those who suffered loss on the lonely sea,” she concluded.

Later in the Memorial Service the new monument was dedicated by Pastor James Douglas while the name of all who lost their lives on the MVChristena were read aloud, a moment of silence was observed and floral wreaths were laid.