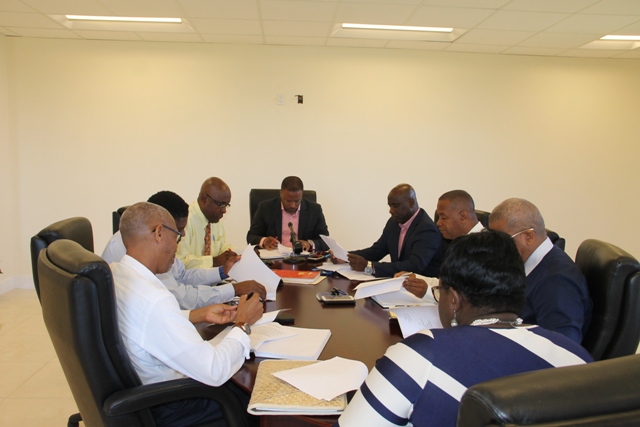 The new Cabinet of Ministers in the Nevis Island Administration at their first meeting at the Cabinet room at Pinney’s Estate on December 28, 2017

NIA CHARLESTOWN NEVIS (December 28, 2017) — The Cabinet of the Nevis Island Administration (NIA) met for the first time on December 28, 2017, at the Cabinet Room at Pinney’s Estate, four days after they were sworn into office at an inauguration ceremony at the Elquemedo T. Willett Park on December 24, 2017.

In brief remarks, Premier of Nevis Hon. Mark Brantley reiterated the new administration’s pledge to remain committed to the interest of the people of Nevis.

“That is our pledge as a new government and I believe that our people will hold us accountable in terms of our delivery on that pledge,” he said.

Premier Brantley noted that the Cabinet is cognisant of the volume of work to be done and convened the first meeting although it is the midst of the festive season.

He used the opportunity to formally welcome the two new ministers in Hon. Eric Evelyn and Hon. Spencer Brand who he said would add some “vim, vigour, vitality” to the work of the Cabinet.

Mr. Brantley also spoke to the other members of the Cabinet—four elected members including himself and Deputy Premier Hon. Alexis Jeffers, two nominated members Hon. Hazel Brandy-Williams and Hon. Troy Liburd, Cabinet Secretary Mr. Stedmond Tross and Legal Advisor Mr. Colin Tyrell – who are charged with making decisions for the people of Nevis.

“Eight people out of a population of over 13,000, we really are the ones charged with making decisions for the rest and I think that ought to put it in perspective, in terms of the awesome responsibility that we have, and our need at all times, to ensure that the interest of our people are put first,” he said.

Hon. Eric Evelyn is the Minister of Culture, Youth, Sports, Community Development and Telecommunications and Information.

Hon. Spencer Brand is the Minister of Labour, Public Works, Physical Planning, Posts and the Environment.

The meeting was the was the first of its kind in which the Hon. Vance Amory, who had led the Concern Citizens Movement Party for 30 years was not a part of. He handed the leadership to Mr. Brantley some months prior to the Nevis Island Assembly elections which was held on December 18, 2017.