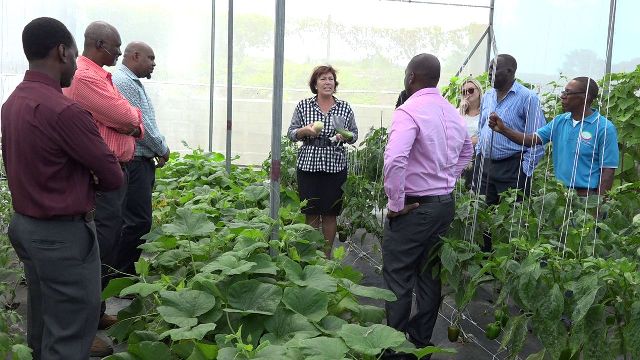 NIA CHARLESTOWN NEVIS (June 08, 2018) — Her Excellency Jan Henderson, New Zealand’s High Commissioner to St. Kitts and Nevis expressed satisfaction with the success of the Charlestown Primary School’s (CPS) vegetable garden, when she took a first-hand look during a visit to Nevis on June 05, 2018.

The garden is being cultivated in a shade house gifted to the school in 2016 by the government and people of New Zealand, through the efforts of Mr. Augustine Merchant Coordinator of the Inter-American Institute for Cooperation on Agriculture (IICA) in St. Kitts and Nevis.

“I am so delighted with this project. I came here over two years ago and the head teacher of the school explained that they wanted to really get the children involved in the school feeding lunch programme and she was very passionate.

“To come back today and see the shade house full of healthy vegetables and to hear from the head teacher exactly how these vegetables are being used to train the children in agricultural techniques, and understanding of the health properties of vegetables and to see its contribution to the school meals programme, I’m just delighted. I want to congratulate all involved. It’s a fantastic and sustainable project,” she said.

The High Commissioner said when she was first told of the project, she thought it was one which encompassed the themes of agriculture and women and children’s empowerment which New Zealand is interested in.

She also used the opportunity to commend IICA for its deep understanding and knowledge of the sort of agriculture that works in Small Island Developing States (SIDS), adding that her country had found the organisation to be a wonderful partner.

“We found IICA and all of the countries we work with in the Caribbean to be a wonderful partner. They really are the specialists in agriculture. They have a deep understanding and knowledge of the sort of agriculture that works in Small Island Developing States and we have found them a wonderful partner,” the High Commissioner said.

Principal of the school Ms. Latoya Jeffers thanked the High Commissioner on behalf of the students and staff for her kind contribution and for investing in the students and presented her with a token of appreciation.

Mr. Merchant also commended Ms. Jeffers and her staff for successfully executing the vegetable garden with supervision from the Department of Agriculture.

He also thanked the High Commissioner for providing the shade house and for giving the students the opportunity to get involved in agriculture.