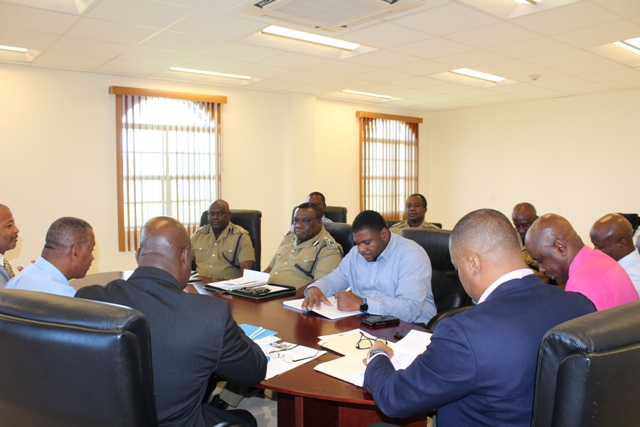 The team of senior officers at the Royal St. Christopher and Nevis Police Force, Nevis Division, led by Deputy Commissioner of Police Hilroy Brandy meeting with the Cabinet of the Nevis Island Administration in the Cabinet room at Pinney’s on January 24, 2018

Mr. Brantley, who is also the Minister of Security, stated that safety and security is one of the most important duties of any government and he is hopeful the meeting is the first of several meetings going forward.

“Safety and security has to be one of the important requirements; one of the most important duties of any government and his government is going to take that duty very seriously

“It’s the first of what we hope to be several interactions with the high command as we move this process forward and as we better secure the safety and security of the island of Nevis,” he said.

The Premier added that the matter of crime has been a troubling issue and the Administration is deeply concerned.

However, they are charged with finding ways and means to curb crime and keep the people of Nevis safe.

“We have a duty to the people of Nevis to keep them safe and that is a duty we take very seriously, and it is a duty we will continue to take seriously…

Mr. Brantley explained that the Administration thought it was important to meet with the senior officers at the Nevis Division to tell them of their expectations and to learn from them what their plans are.

Hon. Hazel Brandy-Williams is at presently off island on official duties overseas and could not be at the meeting.