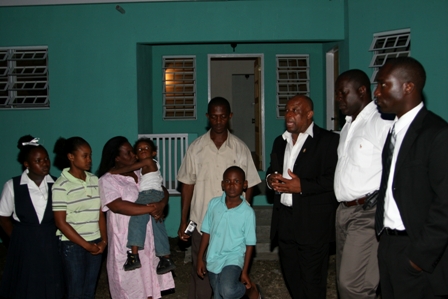 Minister with responsibility for Social Transformation on Nevis Hon. Hensley Daniel (third from right) presents the keys to a three bedroom house (in the background) at the Harbour View Housing Development at Ramsbury to fire victim Mr. William Ize-Iyamu (center) and his family on Friday September 05, 2008 while Minister of Housing and Lands Hon. Robelto Hector

The Nevis Island Administration (NIA) moved quickly on September 05. 2008, to house a Brown Hill family made homeless by an early morning fire that gutted their home and all their possessions earlier that day.
Minister responsible for Social Transformation and Deputy Premier Hon. Hensley Daniel, accompanied by Area Representative Hon. Robelto Hector and Director of the Nevis Housing and Land Development Corporation (NHLDC) Mr. Eustace Nisbett Jr., handed over the keys to a three bedroom house to Mr. William Ize-Iyamu, Ms. Diane William and their four children at the Harbour View Development Project at Ramsbury. Mr. Daniel said the speedy intervention was a demonstration that the NIA cared about the ordinary people of Nevis.

“I think the whole of Nevis must understand that this is where we reach down to the ordinary people of the community, to ensure that their immediate needs are met. I believe Diane and William can sleep a little more comfortable with
The Brown Hill home of the fire victims engulfed in flames earlier in the day
their four children knowing that we have been able to provide them with housing in a very short space of time within 24 hours.

“It is not always possible that we have a housing project where we have vacant homes but certainly we want to point out it is a strategic intervention on our part, so that we can get the family to pick up itself and move on…I would like to present you the keys to this house as an indication of our[the Ministry of Social Development, Minister Robelto Hector and NHLDC]  sincere gratitude to them and also a demonstration of our [NIA’s] willingness to ensure that you and your family are properly housed in this disaster…This is our real way of demonstrating we care and that we have come to serve the people and serve them expeditiously,” he said.

Mr. Daniel who has had 20 years of experience in
TDC Group of Companies (Nevis branch) representative Mr. Andrew Merchant (l) presents the fire victims with a new refrigerator
the area of social work, explained that the normal approach after such a tragedy would be a scattered family, the challenge to find alternate housing and later rebuild the property. However, the NIA’s speedy involvement had allowed for the six member family to remain together. He also noted that the family would be given the option for long term residential use of their new home. 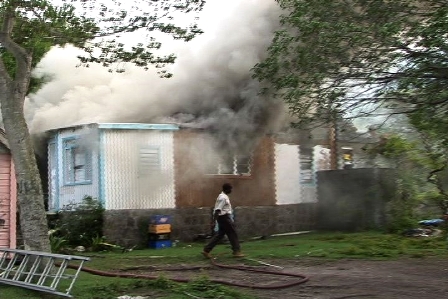 “I want to say to the family Diane and William and all the children, that the Ministry’s focus is on people and we came to government in 2006 with a mandate to address in a very speedy manner the needs of the people,” he said.

Meantime, while he expressed gratitude the various players who collaborated in the venture, the Minister also thanked all the players who had come to the assistance of the family to fight the fire.

“I want as I speak to commend the people of Brown Hill who came out in their numbers this morning, to assist and to ensure that there was no damage to life and limb and that no member of the family was injured. I want to commend the Fire Department for a very speedy response and putting out the blaze quickly and to commend the people from the Disaster Unit for responding speedily,” he said.

In response Mr. Ize-Iyamu registered his thanks to the NIA for its kind gesture.

“On behalf of the family and myself, I would like to thank the Government of the Nevis Island. Today is not a happy day for me but at least I could say it ended with a sparkle in my face. Thanks for everything, thank you,” he said.

Also on hand was TDC Group of Companies Nevis Branch representative Mr. Andrew Merchant, who presented the family with a refrigerator and promised to follow up with a suite of chairs the next day. He told the family that the gesture was representative of his company’s caring nature to people in their time of need. 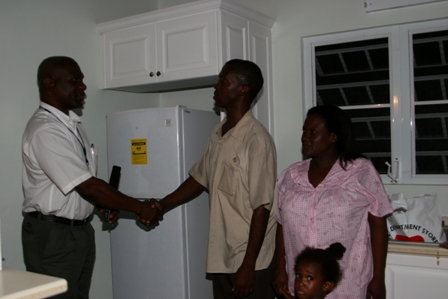