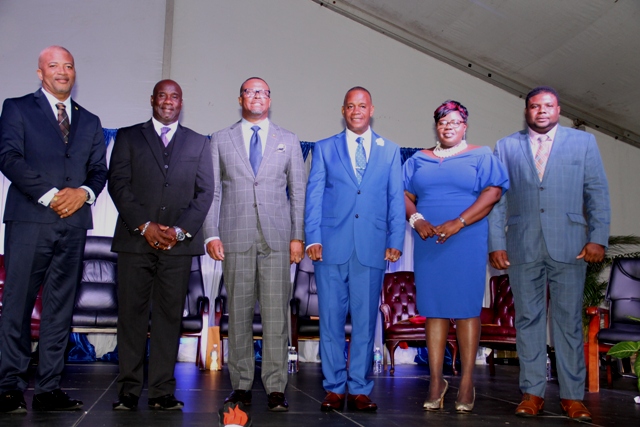 Mr. Brantley, along with three ministers and two junior ministers, were presented with their Instruments of Appointment by Governor General of St. Kitts and Nevis His Excellency Sir Tapley Seaton while the Oaths were administered by Resident Judge Her Ladyship the Hon. Pearletta Lanns.

Mr. Brantley, who took the Oath of Allegiance, the Oath of Office and the Oath of Secrecy, holds the portfolio of the Minister of Finance, Statistics, Economic Planning, Education, Library Services, Human Resources, Industry, Trade and Consumer Affairs, Health, Tourism and Information Technology, Public Utilities and Energy and Foreign Investments.

Hon. Alexis Allison Jeffers, who was sworn in as the Deputy Premier of Nevis, is also the Minister of Agriculture, Lands, Housing, Cooperatives and Fisheries, Natural Resources and Disaster Management

Hon. Hazel Brandy-Williams and Hon. Troy Liburd were sworn in as Junior Ministers in the Premiers Ministry

Mrs. Brandy-Williams has responsibility for Health and Gender Affairs while Mr. Liburd is responsible for Education, Library Services and Information Technology.

During the ceremony, the Nevis Symphonic Band played the national anthem. The Invocation was done by Bishop Stephen Liburd, Scripture readings were read by Ms. Lorna Hunkins and Mr. Theon Tross. The Prayer of Thanksgiving for the new government was delivered by Pastor Wayne Maynard while the Charge and the Benediction were delivered by Pastor Arthur Freeman. Entertainment was provided in song by MACAV, Nneka Ali and Joyah Clarke and Denzil Stanley.