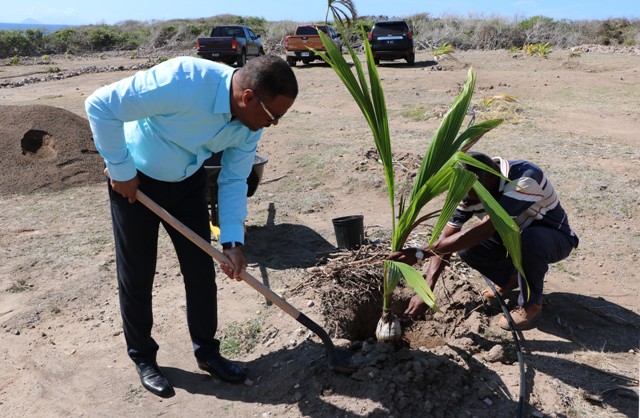 Hon. Mark Brantley, Premier of Nevis and Minister of Tourism, along with Minister of Culture Hon. Eric Evelyn and Minister of Environment Hon. Spencer Brand, accepted the invitation from the NHCS. Mr. Brantley said their tree planting symbolised the NIA’s tangible support for the society and its project and the importance of safeguarding the environment…

“The Nevis Island Administration is committed to the environment, and my being here, besides the symbolism, of it is really to indicate that you have our support at the very highest levels of the government,” he said.

While he thanked the NHCS for the invitation, the Premier described the reforestation project as an important one which speaks to a long-standing tradition of tree planting on the island.

He commended Mr. Keithley Amory, the Project Coordinator for his efforts, and urged members of the public to visit the site.

“I would encourage of course the people of Nevis to come and see what is being done here at Coconut Walk. It’s a project that I know a lot of people have done a lot of work on, and it is something that we commend,” he said.

Ms. Pauline Ngunjiri, Executive Director of NHCS, explained that in an effort to positively combat the effects of climate change the project is designed to reforest the New River coastline.

She stated that the area was earmarked for the United Nations Development Program project because of its historical value. Funding is channelled through the Global Environment Facility (GEF).

The NHCS is also partnering with various ministries and departments in the NIA including the Ministries of Tourism, Public Works, Water Services and Agriculture, and also with various community groups including Helping Our People Excel (HOPE) Nevis Inc.

The Executive Director used the opportunity to applaud the efforts of Mr. Amory on the project.

“We are very privileged to have Mr. Keithley Amory, coordinator of the project. He is a former Director of Agriculture on the island of Nevis, and we think he is a miracle-working man because this area was very desert-like but as you can see, he has coordinated this project very effectively and we appreciate all of the government departments that have partnered with us to create this environment,” she said.

Also present was Mr. Huey Sargeant, Permanent Secretary in the Ministry of Agriculture and Mr. Steve Reid, Acting Chief Extension Officer at the Department of Agriculture.