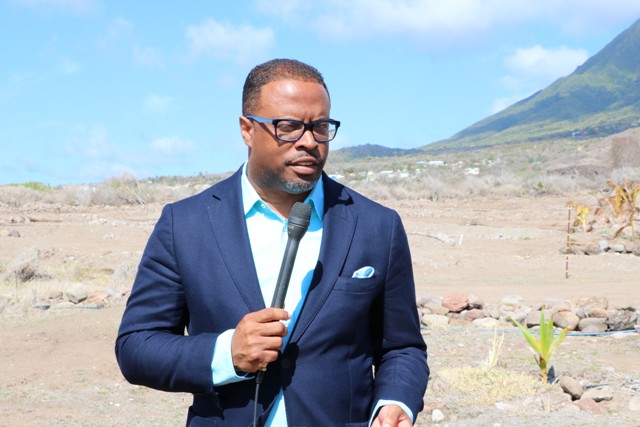 The announcement came from Hon. Mark Brantley, Premier of Nevis, after he and two other senior ministers planted trees at the Nevis Historical and Conservation Society’s  (NHCS) New River Coconut Walk Reforestation Project on April 23, 2019, for Earth Day, which was observed one day earlier.

“Very shortly we will be announcing a programme to plant trees throughout the island. We have been partnering with Agriculture. I think that project will be led by the Deputy Premier and Minister of Agriculture Hon. Alexis Jeffers to plant trees generally, fruit trees in particular, round the island and the public can look forward to that.

“So I think that this for me today is a start of what the government intends to do…I will try and plant this tree, and it is my hope that as Premier of Nevis others will be motivated to plant trees as well all around the island, fruit trees and even those that don’t bear fruit because there’s some beautiful ornamentals that also add tremendous value to the island,” he said.

Mr. Brantley also used the opportunity to speak on other conservation initiatives the NIA hopes to implement.

“We also propose very shortly to employ some litter wardens so they can go out and actually issue tickets to people who are littering. We continue to seek to educate members of the public not to litter, and to use the receptacles that are available and use the proper methodologies for getting rid of garbage,” he said.

Mr. Brantley noted that illegal dumping has been occurring throughout the island and warned that action would be taken against perpetrators once they are caught breaking the laws regarding littering.

“We have seen around the island illegal dumping and anywhere there is a remote site people tend to take old refrigerators, sometimes old cars and trucks and dump them, and we are again appealing to the public. When they are found they will be prosecuted, and I want to make that very clear. Fines will be enforced and people will be prosecuted.

“So I’m urging our people not to dump illegally. We a very good system now of garbage collection and we continue to work very closely with the public. So we are asking for the public’s participation, and if they do what is right then certainly nobody has to worry and we can together protect the environment,” he said.

The Premier also stated that NIA is committed to banning the use of single-use plastics and styrofoam and has been thinking of how best it can be implemented but said in order to do so the Federal government has to be on board to make it a reality.

However, he expressed the view that Nevis could step forward and try to get the main stakeholders involved. He said it is an issue that the administration plans to discuss with the NHCS to seek its assistance in that regard.