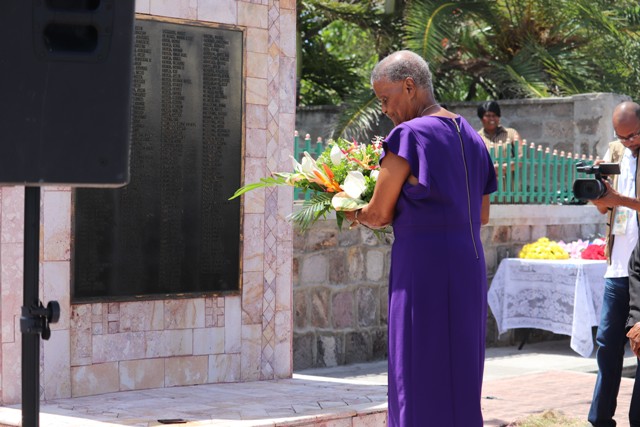 Her Honour Marjorie Morton, Acting Deputy Governor General laying a wreath at the Christena Memorial on Samuel Hunkins Drive at a Memorial Service hosted by the Nevis Island Administration on August 01, 2018, commemorating the 48th anniversary of the Christena Disaster

NIA CHARLESTOWN NEVIS (August 01, 2018) — The Nevis Island Administration (NIA) stopped to remember those who perished and survived in the MV Christena disaster 48 years ago with a Memorial Service at the Christena Memorial on Samuel Hunkins Drive on August 01, 2018.

The disaster which claimed the lives of Nevisians, Kittitians and visitors to St. Kitts and Nevis, happened on Saturday, August 01, 1970, when the vessel, the only ferry then, was traveling to Nevis from Basseterre encountered difficulties and sank in in The Narrows, an area between both islands. There were more than 300 passengers on the vessel; 233 perished and 90 survived.

The fatal incident was a transition point in the history of both islands and to this day, the NIA continues to observe the disaster. Apart from the service, the administration has also erected a memorial outside of the Nevis Island Assembly on Samuel Hunkins Drive, in direct view of The Narrows.

During the memorial service, chairperson Mr. Sydney Newton referred to the annual observance of the solemn event as commendable.

“The MV Christena Disaster referred to as the worst maritime disaster in the Eastern Caribbean is forever etched in the history of St. Kitts and Nevis and the records show that the loss of 233 precious lives and 90 survivors have formed part of that history.

“So the annual observance of this solemn event is commendable, as it signals our nation’s intention to always remember its history, demonstrate solidarity with the families of those directly affected, recognise the survivors and honour those who died,” he said.

Mr. Newton recalls that the disaster took place coincidentally on the weekend of the annual Emancipation Day holiday when many of the island’s most valued and productive citizens including civil servants, farmers, hucksters and others were returning home to Nevis to be with their families and friends, after spending a day, and in some cases, months on the sister island of St. Kitts.

He said the loss of loved ones, many of whom were the breadwinners in their families, resulted in unimaginable sorrow, grief, pain and hardship but with God’s help and the resilience of a determined people, they are gone past the tragedy and have forged ahead for 48 years to build a brighter future for the younger and unborn generations.

Mr. Newton noted that this was achieved in the absence of help from professional counsellors, psychologists, psychiatrists and therapists.

However, while there has never been a structured or formal assessment of the emotional impact of the disaster on survivors, their immediate families and the citizenry in general , the scars of the traumatic event are engraved in the memory of those directly affected, many of whom still suffer in silence to this day.

He used the opportunity to urge others to show gratitude for God’s help during and after the disaster.

“May we be eternal grateful to God Almighty for his abundant grace and mercy over the years and for giving us, as a people, the will and the strength to go on when all seemed lost and to thank the many responders or rescuers for their heroic interventions that averted an even greater disaster,” he said.