Minister of Health in the NIA the Honourable Hensley Daniel presenting supplies to Medical Chief of Staff Dr. John Essien

At a brief ceremony on Dec. 15 at the Alexandra Hospital, Minister Daniel said it was his pleasure to ensure that the hospital had a regular supply of items to facilitate medical care.

He expressed pride that Dr. Lehman Bates, through GFA, had pledged and lived up to his organisation’s willingness to assist the Ministry of Health by donating healthcare supplies which included gloves, temperature and sugar measuring instruments, syringes, bandages and gauze supplies.

Following Minister Daniel’s receipt of the items, he hosted an official handing over ceremony where he publicly thanked the hospital staff, who, together with Medical Chief of Staff Dr. John Essien and Matron Mrs. Aldris Pemberton-Dias compiled the list that was submitted to the donor.

The Ministry of Health is expected to, in 2011, benefit from another act of kindness by GFA. This, Minister Daniel said is as a result of the strong partnership that the faith-based organisation and the NIA had established and “the instrumental role” of Pastor Davidson Morton of the Eden Browne Church of God. 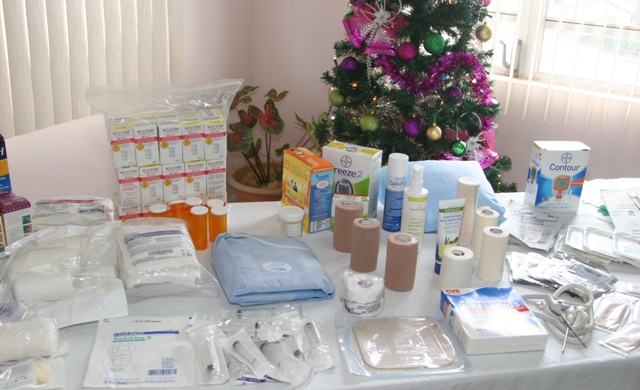 Some of the items donated by Global Faith Alliance

“Dr. Bates has indicated that in January, he is going to send a team of medical professionals to Nevis to host some clinics and he has also indicated that he will send a team to help us do some voluntary work with regards to health facilities: painting, cleaning, power washing, those kinds of things because they have developed an organisation which seeks to spread its wings across the globe,” Minister Daniel explained.

Dr. Essien accepted the items on the hospital’s behalf and said that while persons may not think of them [the supplies] as important, “they are essential to medical care.”