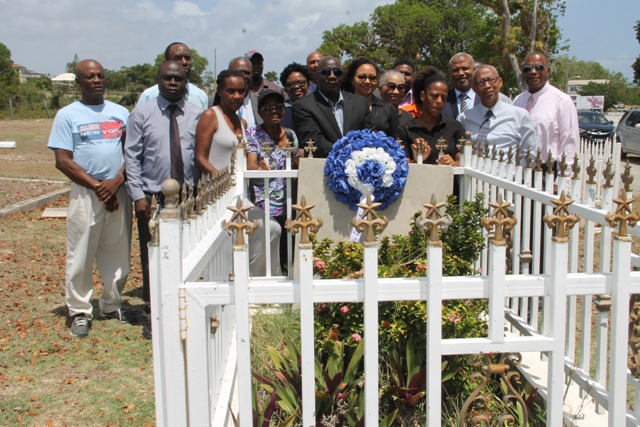 Hon. Alexis Jeffers (5th from left, first row) colleague ministers in the Nevis Island Administration and well-wishers at the grave-site of the late Malcolm Guishard to mark the 11th anniversary of his passing on June 11, 2018 at Bath Cemetery. First Lady Mrs. Sharon Brantley stands on his immediate right and Ms. Shenelle Guishard, daughter of the late Mr. Guishard stands on her immediate right

Hon. Alexis Jeffers, Deputy Premier, speaking on behalf of Hon. Mark Brantley, Premier of Nevis recalled memories of Mr. Guishard who had served in the NIA for 14 years.

“Malcolm’s passing would have certainly left a void here on the island of Nevis…and a rich legacy behind as well. Many of us would have known his exploits in various areas and sectors here…He served in the NIA from 1992-2006 and during that period of time he would have held various portfolios including Minister of Agriculture, Lands, Housing, Communications and Works.

“We share in the grief and the sadness that the family continues to grapple with. As a matter of fact, earlier today I would have made a call to the wife of the late Malcolm Guishard, Yvonne Guishard, and she herself is still feeling the effects of Malcolm’s passing, even 11 years later. It shows how important and what a major asset Malcolm would have been to his family and also to the island of Nevis,” he said.

Mr. Jeffers also conveyed the Administration’s continued sympathy to Mr. Guishard’s family and reminded that he had left an unforgettable legacy for all to enjoy.

“His passing has left us with some treasures and things we can certainly hold on to for time to come… We are happy for his contributions to the island of Nevis and the Federation of St. Kitts and Nevis on a whole.”

To mark the occasion, a wreath was laid on the grave on behalf of the Administration by Mrs. Sharon Brantley, First Lady of Nevis in the absence of her husband, Mr. Brantley who is presently overseas attending to government business.

The ceremony was officiated by Pastor Wayne Maynard.