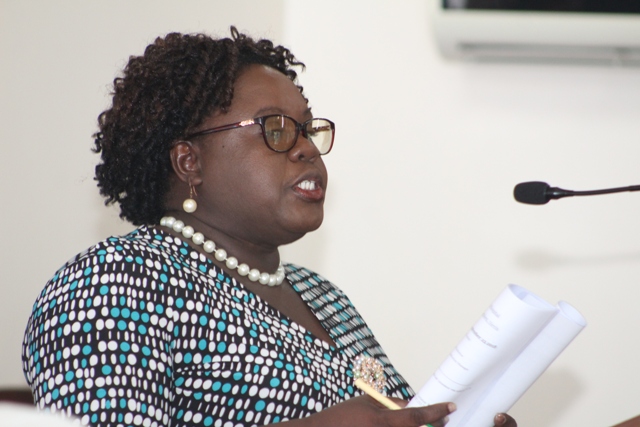 Hon. Hazel Brandy-Williams, Junior Minister with responsibility for Health on Nevis, at a sitting of the Nevis Island Assembly on October 04, 2018

NIA CHARLESTOWN NEVIS (October 04, 2018) — The Nevis Island Administration is pleased with the pace of construction on the $19million expansion project at the Alexandra Hospital.

Hon. Hazel Brandy-Williams, Junior Minister with responsibility for Health, in a report at the sitting of the Nevis Island Assembly on October 04, 2018, said that the multi-million dollar extension project with two contractors is going according to plan.

“I want to report to the general public that so far we are satisfied with the work that has been done and based on the report given by the construction manager Mr. Billy Claxton, we are indeed comfortable that the work is going according to plan and it is right on target,” she said.

Mr. Edrick Pemberton of Wedge Construction is responsible for the construction of the Physiotherapy Wing, the Paediatric Isolation Wing and the Laboratory Wing. His contract with variation is $7.2 million.

The other contractor, Mr. Clive Evelyn of Evelyn’s Construction is responsible for the Operating Theatre and the Radiology Wing and his contract with variation is $9.1million.

In addition a cistern constructed at the bottom of that section which will hold 35,000 gallons of water is 100 percent completed.

Minister Brandy-Williams used the opportunity to continue to encourage the nurses and workers at the Alexandra Hospital to bear with the NIA through the construction stage and thanked them for their efforts.

“I know that they are working under very trying situations and so, I continue to thank them for their efforts. Thank them for continuing to deliver sterling service in the healthcare sector,” she said.

The NIA broke ground for the project, jointly funded by the Sugar Industry Diversification Fund and the Nevis Island Administration in 2017. Construction began in May 2018. The first phase of the project is $12 million, with a $7 million grant from the SIDF. The second phase is estimated to cost $7 million.  The project manager is Billy Claxton.