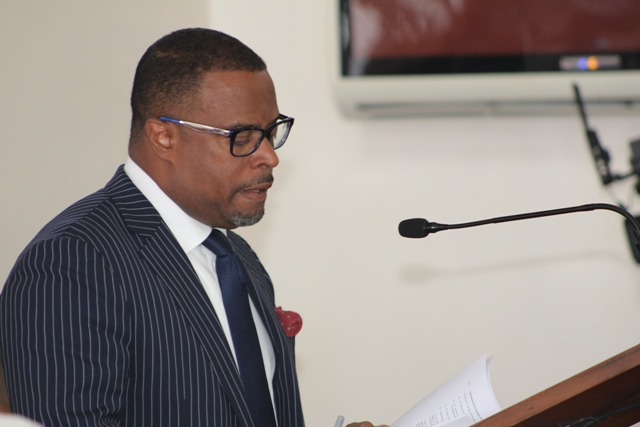 Hon. Mark Brantley, Premier of Nevis at a sitting of the Nevis Island Assembly on October 04, 2018

NIA CHARLESTOWN NEVIS (October 04, 2018) — The following is a statement made by Hon. Mark Brantley, Premier of Nevis and Minister of Health in the Nevis Island Administration (NIA), at a sitting of the Nevis Island Assembly on October 04, 2018, giving an update on an explosion which occurred at an Medical University of the Americas (MUA) student dormitory on the night of October 03, 2018, in which two students were severely injured.

Just to update the public and the House that late last evening we received word that there was a massive explosion in a dormitory that houses students at the Medical University of the Americas.

We gather from the information received thus far, that two students have been badly injured in that explosion. I myself was at the hospital late last night and observed the hospital staff trying to stabilise both of those two students.

I have also been advised that one of the students was taken via air ambulance, somewhere around 2 o’clock this morning, to the United States for additional care. The other student is still with us here and receiving care at our hospital until that student too can be medevaced to the United States.

We gather that the students are 28 years old and 31 years old. Both were in their final stages of their sojourn here at the Medical University of the Americas.

We are uncertain at this stage as to the cause of the explosion but I believe that the relevant authorities have the situation well in hand, and are undertaking the necessary investigation.

I wanted just to say that briefly, to assuage any concerns that the public may have because I gather there would have been a lot of chatter as one would expect but in the circumstances, we do not know much more than what I’m indicating

We will continue to work very closely with the authorities and with the Medical University of the Americas, to ensure that the safety and security of their students continues to be preserved.

I will ask the House of course and the public to pray for the two students who are clearly in some distress, and we trust and hope and pray that they both will be able to recover fully, and that there will be no loss of life in these very tragic circumstances.

So I want to, just as I said, update the House on that and to indicate, as I have more information I will share that information so that all of us here can continue to understand the situation and continue to pray for the very best for these two students, who have suffered gravely based on the initial information that we’ve had.