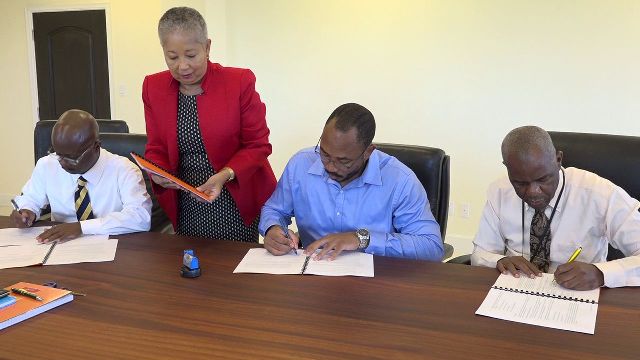 NIA CHARLESTOWN NEVIS (February 07, 2019) — The Nevis Island Administration (NIA) through the Nevis Air and Sea Port Authority (NASPA), is one step closer to upgrading operations at the Vance W. Amory International Airport at Newcastle, when a Concession Agreement regarding the development of the airport with B&L Worldwide Ltd. was signed on February 06, 2019, at Cabinet Room at Pinney’s Estate.

Hon. Alexis Jeffers Deputy Premier of Nevis noted that the agreement was looking to the future, and expressed hope that the partnership between the NIA, NASPA and the investor, would bring benefit to Nevis.

“We are looking towards possibly making Vance W. Amory International Airport a hub of activity in the future, and of course we are looking for a partner to do so and B&L Worldwide Ltd. would have approached us to provide such partnership…”

The Deputy Premier, who stood in for Hon. Mark Brantley, Premier of Nevis who is off island on official business, stated that the agreement is not a unilateral one but is a collective decision arrived at by all the members of the NIA Cabinet.

Mr. Jeffers indicated that the contents of the agreement would be made public, and they would also be consulted in public forums as the project progresses.

“All of the details of this particular agreement will be known to the general public. There is nothing that I see in this agreement that is inconsistent with what you will find in any concession agreement.

“We are hoping to see some development in the near future and of course the general public will be engaged in what goes on because, of course [with] any development you will have an Environmental Impact Assessment (EIA) being done, you have to have discussions and all those would be a part of the whole process as we go along,” he said.

Meantime, Mr. Jonel Powell Managing Director and Legal Counsel of B&L Worldwide Ltd. who signed on behalf of the company, said it was an exciting time to be a part of a project which he expects will benefit the people of Nevis and by extension the people of the Federation, and gave an overview of the project.

“The objective behind this is to improve on the infrastructure that is there, and to increase the airlift and the travel experience coming through the Vance W. Amory International Airport.

“As we all know, it has been a challenge in recent times, and this is expected to be a very meaningful solution to that issue and so we look forward to seeing a lot, not just an expansion of the airport but in upgrade in facilities.

“I can tell you that my clients had preliminary discussions even in terms of a private jet facility within that development, and the introduction of at least one major airline coming through the Vance W. Amory International Airport providing hub services, and that in itself not only increases the traffic, and obviously the spinoff to the island will be tremendous but it will also directly provide additional income for the Nevis Island Administration,” he said.

Mr. Powell assured that the situation is not one in which the investor would take over the airport. He noted that under the agreement, the NASPA is expected to continue its operations at the facility with revenue collections flowing to the NIA.

He regards the move as a win, win for the NIA because of the expected additional revenue generation which he hopes will serve as a major boost to the economy, and the general development of Nevis going forward.

Mr. Oral Brandy, Manager of NASPA, who signed the agreement on behalf of the authority welcomed in the face of the airport’s diminishing revenue in recent years.

“We believe that a project like this will turn things around, and we have over the years recognize the significant drop in revenue and profits and so, we believe that having this project it would be significant to the improvement of the level of revenues that we will receive at the Vance W. Amory International Airport. We are indeed looking forward to this development,” he said.