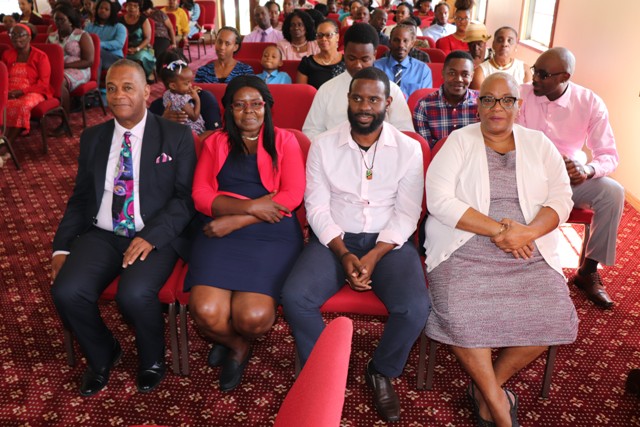 Hon. Eric Evelyn, Minister of Information (extreme left); Ms. Judith Dasent, Acting Director at the Department of Information and staff worshipping at the New Testament Church of God at Bath Village on January 27, 2019 at the start of the department’s awareness week of activities

Ms. Judith Dasent, the department’s Acting Director, stated that though the department has been in existence for some years, the public is still not aware of how the NIA’s communications department actually functions, and the time has come to reverse that.

“We are planning a week of activities and this is to allow the general public to be aware of what it is we do because I think it is taken for granted that we are sitting down in the office and waiting for a phone call. That’s not what we do. We have editors, we have writers, we have programmers, and we have different persons doing various things,” she said.

For the first event on January 27, members of staff along with Hon. Eric Evelyn, Minister of Information, worshipped at the New Testament Church of God at Bath Village.

The other activities for the week are an Open Day on Tuesday, January 29, in which the public will have the opportunity to see the department’s staff at work. Wednesday, January 30 and Thursday, January 31 will be in-house training and on Friday February 01, will be the first in series of staff development sessions dubbed “Lunch and Learn” and “Games Night.”

On Saturday, February 02, the last day of the week of activities, the department’s staff will treat themselves to a Safari Island Tour.

Throughout the week, which is expected to become an annual event, former anchors will present the news and sports packages daily on Nevis Television (NTv) Channel 99 and www.nevistvonline.com