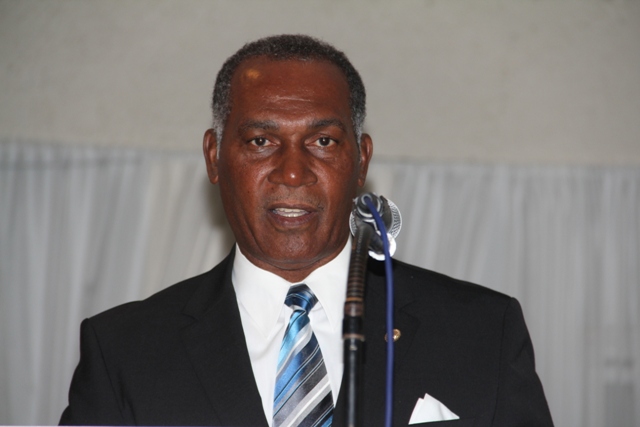 Premier of Nevis Hon. Vance Amory delivering remarks at the 11th annual Police Constables Award Ceremony and Dinner of the Royal St. Christopher and Nevis Police Force, Nevis Division on March 01, 2014, at the Occasions Entertainment Arcade
NIA CHARLESTOWN NEVIS (March 04, 2014) –If crime is prevented, the demand to solve crimes would be non-existent. That was the profound message of Premier of Nevis and Minister responsible for Security in the Nevis Island Administration (NIA) Hon. Vance Amory.
He was at the time delivering remarks at the 11th annual Police Constables Awards Ceremony and Dinner at the Occasions Entertainment Arcade on March 01, 2014.The event was hosted by the Strategic Planning Group of the Royal St. Christopher and Nevis Police Force, Nevis Division in collaboration with the NIA.
“I want to simply say to all of us who are here, police officers and civilians alike, that we are dealing with a very small minority of misguided persons but in all of that but we have to remember that they are a part of us, family members, community dwellers, they live in the same villages that some of us live in.and my thrust…is to enlist every single citizen of this country to become, in your own way, eyes and ears and the mouths and the informants for the police. If you are helping the police, always remember that you are helping yourself.
“The Police are not called upon to act or perform their duties in a vacuum. The police depend on persons who have information, to persons that have that information to the solution of crime and also to the prevention of crime. Ultimately, if we prevent crime from taking place then the demand to solve the crime does not exist. Simple logical statement. If it’s not there, then you don’t have to engage in solving,” he said.
Mr. Amory’s comments came days after two days after gun-related crimes occurred on the same day in public places in broad daylight, following a shooting death and another shooting incident on the grounds of the government-owned Public Works Department during working hours, incidents which had brought a wave of uneasiness on the island.
Notwithstanding, the Security Minister said though his approach to law enforcement was different, the NIA would continue to ensure that the rule of law and enforcement remained paramount to ensure the safety of all residents and visitors.
“I have a very strict position when it comes to law enforcement. My simple approach is that I do not interfere with the Police. I interface with them and give them the support which we are able to give and any advice which I am able to give from my vantage point. Also in talking to the High Command periodically, we discuss some very important strategies which the Police Force establish in their fight against crime.
“It is always a pleasure to express to them, my own view on how we could, as Government and Police within the community of Nevis, do such things which would ensure that the work of the Police, though not easy, will certainly end in the benefit which we desire and that is to have a peaceable community; a safe community and one in which our citizens and visitors can feel comfortable in their homes and streets and those who visit us can know, that they are coming to a place where the rule of law and the enforcement of law is paramount and that we shall continue to ensure that that is the case,” he said.