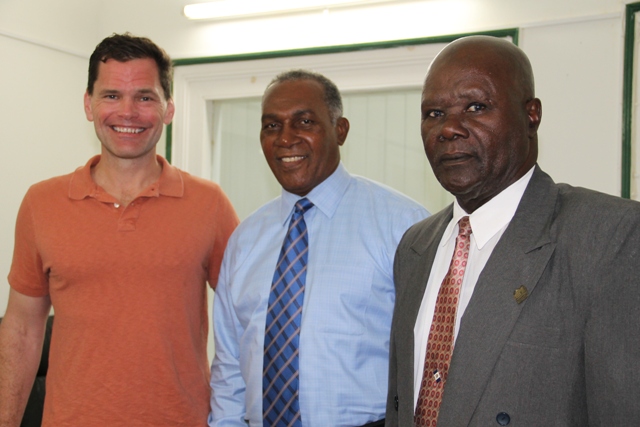 NIA CHARLESTOWN NEVIS (March 08, 2016) — Premier of Nevis Hon. Vance Amory says the Nevis Island Administration would be pleased to establish relations with North Carolina and explore how Nevis and St. Kitts and Nevis could mutually benefit from the relationship.

Mr. Amory made the comment at the end of a visit from the United States Legislator Grier Martin of the North Carolina House of Representatives, from 34th District at his Bath Hotel office on March 08, 2016.

Mr. Grier who is holidaying on Nevis told the Department of Information that the North Carolina House of Representatives is similar in many respects to the Nevis Island Assembly and to the Government of Nevis.

He described the legislature in North Carolina as a sub-national government which has many powers over the state government and likened it to the relationship between the Nevis Island Administration and the Federal Government.

The North Carolina Legislator said he had the opportunity to learn a lot from Premier Amory and President of the Nevis Island Assembly Hon. Farrel Smithen and hoped to apply the new knowledge on his return.

Mr. Grier expressed hope that the people of Nevis and his home state could grow a relationship to exchange knowledge and also for trade benefits.

He said his visit was the second to Nevis and he looks forward to many more.