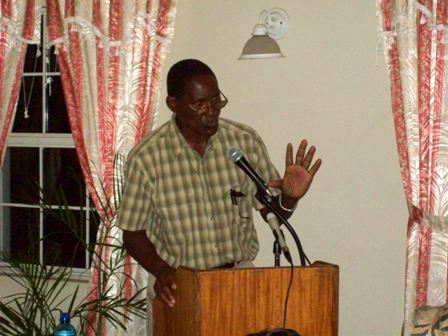 The Nevis Reformation Party (NRP)-led Nevis Island Administration (NIA) continued to look at crime in a serious manner. Premier of Nevis Hon. Joseph Parry hosted a lecture by Nevisian Author and Educator, Mr. Whitman Browne who discussed the topic: “Countering Criminal Behaviour in our Changing Caribbean”. The event was held on August 06, 2008, at the Red Cross building on Chapel Street, Charlestown.

On delivering brief remarks, Premier Parry praised the police for a job well done to combat crime on the island. “I would like to give congratulations to Superintendent Seabrookes, Commissioner Williams and Deputy Commissioner Stafford for doing a marvelous job during the Culturama season. “I would also like to thank the members of the St. Kitts Police Force for their assistance and support in executing checks and raids. I am also pleased to announce that the raids will be on a continual basis until we are satisfied that we have brought this crime wave under control,” said the Premier. Premier Parry noted the steps taken by the NIA to alleviate crime in Nevis. He said that surveillance cameras would be placed around Charlestown shortly to monitor criminal activity on the island. Audience attending the lecture on crime He also discussed the recently ended training programme in Trinidad, where young Nevisians were granted the opportunity to acquire skills that would give them a sense of pride and accomplishment. Mr. Parry referred to the programme as one that should be supported rather than criticised. “I truly believe any effort to undermine the programme will not be in the best interest of Nevisians,” he explained. The Premier also reminded the audience of the great effort by the NIA, to train Nevisians and give them the opportunity to gain worthwhile skills, so that they would be deterred from any involvement in criminal activity. During the symposium, featured speaker Mr. Whitman Browne offered guidelines on how to counter criminal behaviour in the Caribbean region. “Education is necessary for change,” he said, “forewarned is forearmed.” He explained to the audience what would happen if immediate changes were not made by those in society. Mr. Browne warned that there was a great need to make immediate changes before the problem escalated. “Crime is everyone’s business not just the government’s business. The community should meet on a regular basis and share ideas with one another. If we don’t take action now, we will be destroying ourselves. If we continue to have all these murders in our society, we can begin to see our people dying little by little. Who will become the rulers of our society- the gangs? Then once they have killed one another they will turn on whoever is left, it is a serious situation,” Mr. Browne said. Among the audience, crammed into the main hall of the Red Cross building, were returning nationals, students and persons from the private and public sectors. Mr. Whitman Browne hails from the village of Butlers, in St. James and is the author of three books, The Christena Disaster, The Christena Disaster in Retrospect and From Commoner to King-Biography of the First Premier of St. Kitts/Nevis, the Hon. Robert Llewellyn Bradshaw. 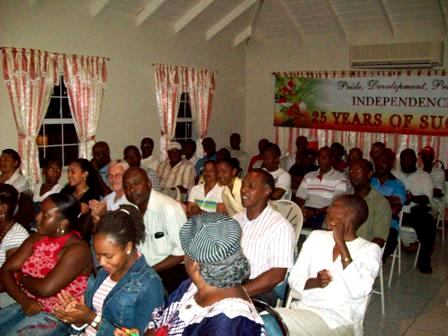